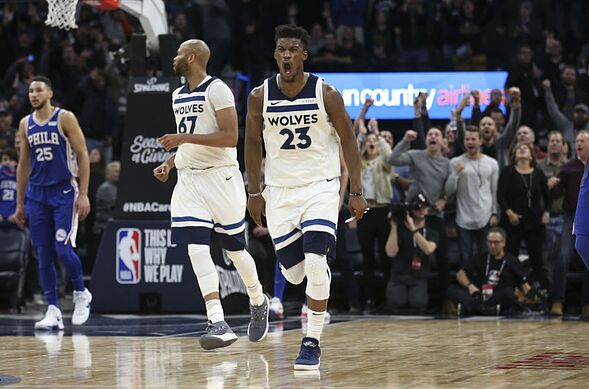 The Minnesota Timberwolves’ All-Star forward Jimmy Butler wants a new home and we would love to give him one. A team on the up-and-up in the Eastern Conference that has a ton of assets could be the perfect partner in a trade deal, this team is the Philadelphia 76ers.

After a disappointing 120-109 loss to the Los Angeles Clippers last night, the Minnesota Timberwolves are in distraught as the 13th seed in the Western Conference with a record of 4-7.

The Jimmy Butler drama is obviously hurting this teams chemistry and a deal needs to be made.

Here at Dunking With Wolves we’ve written a plethora of trade pieces for Butler’s talents, which even includes a trade piece that entails 30 potential Butler trades to every NBA team.

However, trading Jimmy Butler to the Philadelphia 76ers could be tricky, as the Wolves’ front office may have cut ties there, as reported by NBC Sports and The Ringer below:

Via, NBC Sports and The Ringer

“Just a few hours following The Athletic’s Sam Amick report that the Sixers were “completely out” on Jimmy Butler after preliminary discussions, another nugget sprinkled out into the internet.

One of the things that I’ve heard from a handful of sources is that—with the Sixers for example—the initial offer that they made, the counter-offer was like, ‘We need Ben Simmons in a deal.’”
K, bye.

We’ve written plenty on why Butler isn’t the right star for the Sixers. Just today, my teammate Paul Hudrick had this to write about Butler:

Butler is a very good, two-way basketball player that would make Elton Brand’s team better immediately. … But his fit just isn’t perfect. He’s never been an elite three-point shooter, most of his points are scored in isolation and this is the second time he couldn’t play nice with other stars. The Sixers need to surround Joel Embiid and Ben Simmons with shooters, Brett Brown’s offense relies on pace and space, and it doesn’t seem ideal to bring Butler into a situation where he’d be playing second or third fiddle.”

So why would Philadelphia make a move for the 4-time All-Star when the Sixers are a fast-paced 3-point shooting team that doesn’t require a ball-needy wing?

Because it’s obvious that the Sixers aren’t who we thought they were.

They aren’t a top-ten team in the league like last years post season results may have indicated, and it’s also apparent that the loss of 3-point studs Marco Belinelli and Ersan Ilyasova hurt the fluidity of their offense (24th offensive rating in NBA).

And while the Sixers could use a high volume spot up shooter like Klay Thompson more than Jimmy Butler, they still need to entice Thompson-like players to come to Philly next summer in free agency, as they are one of 11 teams that can afford a max contract player.

Obtaining Butler’s bird rights, signing JB long term, and then going out for another All-Star next Summer would be the cherry on top for the Joel Embiid and Ben Simmons-led Sixers, who could potentially blow the East wide open with 4 All-Stars in their starting lineup next season.

The 76ers need to look in the mirror and realize that they have a healthy team that is supposed to be good, but they just aren’t. Much like the Markelle Fultz situation, Philly is struggling with their identity.

However, Philly does have a quality that is embedded in their organization, they’re gritty.

And just being gritty and playing well at home isn’t cutting it, sitting at a record of 6-5 and losing to the embarrassingly bad Brooklyn Nets last night 122-97.

Jimmy Butler epitomizes the ego and grit of Philadelphia. And their silent killer in Ben Simmons, as well as their loud killer in Joel Embiid, could create an insane trio this season.

We have two possible trade scenario’s that could potentially land Jimmy Butler in Philadelphia, allowing the Sixers to keep Simmons and Embiid, while the Wolves get a solid haul in return for the 4-time All-Star.