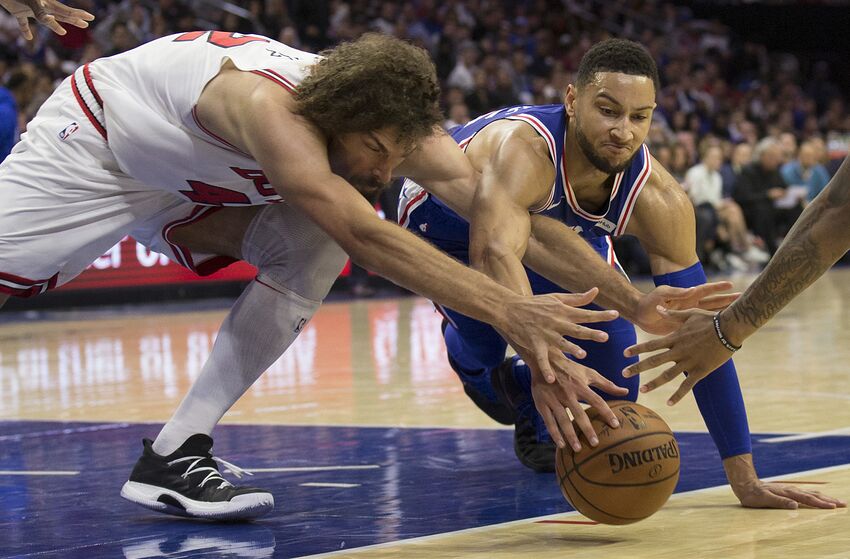 PHILADELPHIA, PA – OCTOBER 18: Robin Lopez #42 of the Chicago Bulls Ben Simmons #25 of the Philadelphia 76ers dive for the ball in the third quarter at Wells Fargo Center on October 18, 2018 in Philadelphia, Pennsylvania. The 76ers defeated the Bulls 127-108. NOTE TO USER: User expressly acknowledges and agrees that, by downloading and or using this photograph, User is consenting to the terms and conditions of the Getty Images License Agreement. (Photo by Mitchell Leff/Getty Images)

Processing the Philadelphia 76ers: Is Ben Simmons making the leap? by Christopher Kline

Early in the Philadelphia 76ers season, it’s become clear that the club’s franchise point guard is becoming one of the best defenders in the NBA.

It might be premature to say, not even a full week into the NBA regular season, but the defensive elites in the NBA may have a new player joining their ranks. While Joel Embiid is Philadelphia 76ers best inside defender and Robert Covington may still be the Sixers best perimeter defender, Ben Simmons is clearly the most versatile defender the franchise has.

In just two games into the regular season, Simmons has defended all five positions multiple times and has done a good, if not exceptional, job doing so. The 6-foot-10 point guard has a natural advantage being the biggest player at this position.

Last season Christopher Kline, the Co-Site Expert of The Sixer Sense wrote how Simmons was already one of the better defensive point guards in the NBA. It’s hard to believe, but Simmons has already shown significant improvement from his rookie year on the defensive side of the ball.

The significant jumps in rebounds, blocks and steals are crazy. Even if these numbers dip slightly as the season progresses, he still will be one of the best defenders in the NBA. Currently, Simmons is tied for third in total rebounds, tied for ninth in steals and tied for eighth in blocks. While the normal defensive stat rankings are impressive, advance stats show just how elite Simmons has been two games into the regular season.

Simmons has the second best Defensive Rating in the NBA only behind Gordon Hayward. He is also tied for first in Defensive Win Shares and his third in Defensive Box Plus/Minus only behind Nicolas Batum and Cory Joseph.

Both regular and advance statistics show that Simmons is becoming one of the best defenders in the NBA. Simmons’ defensive versatility is on par with that of the Golden State Warriors power forward Draymond Green and the Toronto Raptors small forward Kawhi Leonard. If Simmons can keep up this level of defensive energy and production, then I may have to change my choice of Defensive Player of the Year from Embiid to Simmons.

Next: Processing the Philadelphia 76ers: Is Simmons making the leap?

The Philadelphia 76ers and fans should be ecstatic with the improvement that Simmons has made defensively entering this season.  Hopefully he can sustain this level of defense throughout the rest of the season. While it would be nice if Simmons showed offensive improvement with a jump shot, it’s clear that he still showed improvement in other areas outside of a jumper.