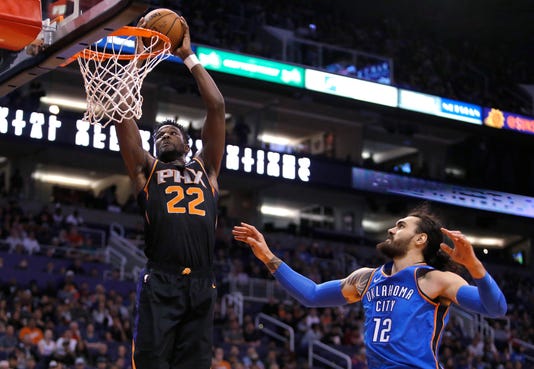 PHILADELPHIA – Deandre Ayton and Jamal Crawford have developed a pregame routine that the rookie 7-footer appreciates.

“He just talks to me before the game, he talks to me about who I’m matched up with,” Ayton said after Wednesday’s win over San Antonio. “Just giving me confidence. Having a super amazing vet like that is amazing.”

So what words of wisdom will Crawford impart on Ayton before he faces Joel Embiid, who said Ayton was going to “get his ass kicked this year” on ESPN’s “The Jump”?

“I’ll have a message for him by then,” said Crawford, smiling. 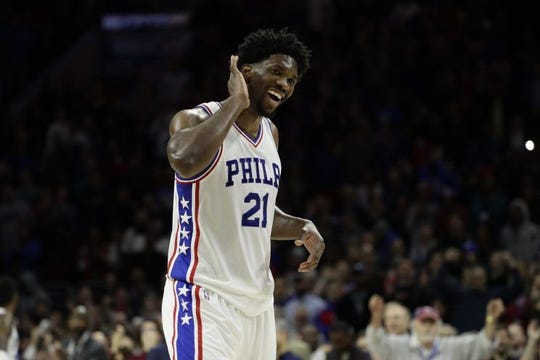 Back in September, the 20-year-old Ayton took the high road when asked about Embiid’s comments about him.

“I can’t really say anything,” Ayton said. “I haven’t put the ball in the hoop (in an NBA game). The only thing I could is probably let my game talk and compete.”

Two months, 15 games and nine double-doubles later, Ayton has established himself as one of the leading candidates for NBA’s Rookie of the Year award. He’s averaging 16.3 points, 10.5 rebounds and shooting 60.3 percent from the field.

Ayton’s taken his lumps from Nikola Jokic, LaMarcus Aldridge, Anthony Davis and Steven Adams, but he’s dished out some punishment, too.

Now the time has come for Ayton to see how he stacks up against Embiid, a gifted 7-footer. 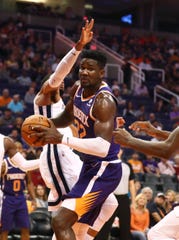 “It’s another game,” Ayton said after Saturday’s 10-point home loss to Oklahoma City. “A game we want to win. That’s about it.”

Ayton knows what Embiid said and has talked some talk so far this season, but just like media day two months ago, he refuses to engage in a verbal battle with Embiid.

“I don’t even indulge in those type of things,” Ayton said. “I just play. I just play every time.”

When Phoenix drafted the one-and-done talent out of Arizona at No. 1 overall, Embiid, 24, the third overall pick in the 2014 draft, quickly took to Twitter and shot down the comparisons, saying he plays defense and conversely suggested Ayton doesn’t.

Don’t compare Ayton to me either… I play DEFENSE

Then Embiid dropped the mic with his comments on ESPN.

“Oh my God. He’s about to get his ass kicked this year,” he said.

That’s not the only thing Embiid said.

Suns coach Igor Kokoskov has repeatedly said Ayton is going through the “rookie orientation program” this season. A big part of that has been playing defense, and Ayton has had his struggles staying in front of big men who have good footwork and multiple moves in the post.

Jokic and Adams have made Ayton look bad with drop steps and up-and-under moves. Embiid is very skilled around the block, but he can also knock down 3-pointers. The All-Star center is averaging 27.7 points and 12.9 boards, while shooting 45.9 percent from the field and knocking down 32.9 percent of his 3s. 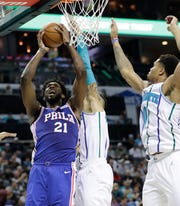 Embiid has made 26 shots from distance this season. He may look to take Ayton out there like Marc Gasol did in making three 3-pointers in Memphis’ 21-point win over the Suns last month.

Ayton will certainly have his hands full, but he can win the track meet against Embiid and beat him down the floor if Phoenix pushes the ball in transition.

Ayton may also have a quickness advantage he can utilize to gobble up offensive rebounds.

Of all head-to-head matchups for Ayton, his bout with Embiid in the hometown of former heavyweight champion Joe Frazier and Hollywood’s hero, Rocky Balboa, has been much anticipated.

Ayton has gotten up for every big man he’s faced. The outcome hasn’t always gone in his favor, but he’s taken on those challenges.

This will be his biggest one to date because of the buildup for it.

Ayton says it’s just another game and Crawford may tell him that in the visiting locker room, but those two and everyone else in the arena Monday night will know better.

Outlook: Phoenix (3-12) has lost five of its past six games after Saturday’s 110-100 loss to Oklahoma City, which is now 3-0 against the Suns. … Philadelphia (11-7) has won three of its past four after Saturday’s 122-119 overtime win at Charlotte. The 76ers beat Utah at home, 113-107, on the front end of a back-to-back before defeating the Hornets. … Suns forward Trevor Ariza has missed the past two games for personal reasons, but he has rejoined the team. … Philadelphia is 2-1 with Jimmy Butler after he was acquired in a trade with Minnesota last week. … Devin Booker posted consecutive double-doubles for the first time in his career as he’s had a career-high 12 assists in each of his past two games to go along with 13 points Wednesday against San Antonio and 16 points against Oklahoma City. … Joel Embiid posted 33 points and 11 rebounds in Saturday’s overtime win as he’s averaging career highs in points (27.7), rebounds (12.9), and minutes played (34.9). … TJ Warren has led Phoenix in scoring in its past four games (25, 21, 27, 23) after scoring 29 in an overtime loss to Boston. Booker scored a team-high 38 against the Celtics.