A back-to-back in Detroit and Milwaukee earlier this week didn’t bring the 76ers the success they were looking for.

But it did take the team to the NBA’s two newest venues.

With some time to kill before each game, I decided to scope the arenas out. Here’s what I found… 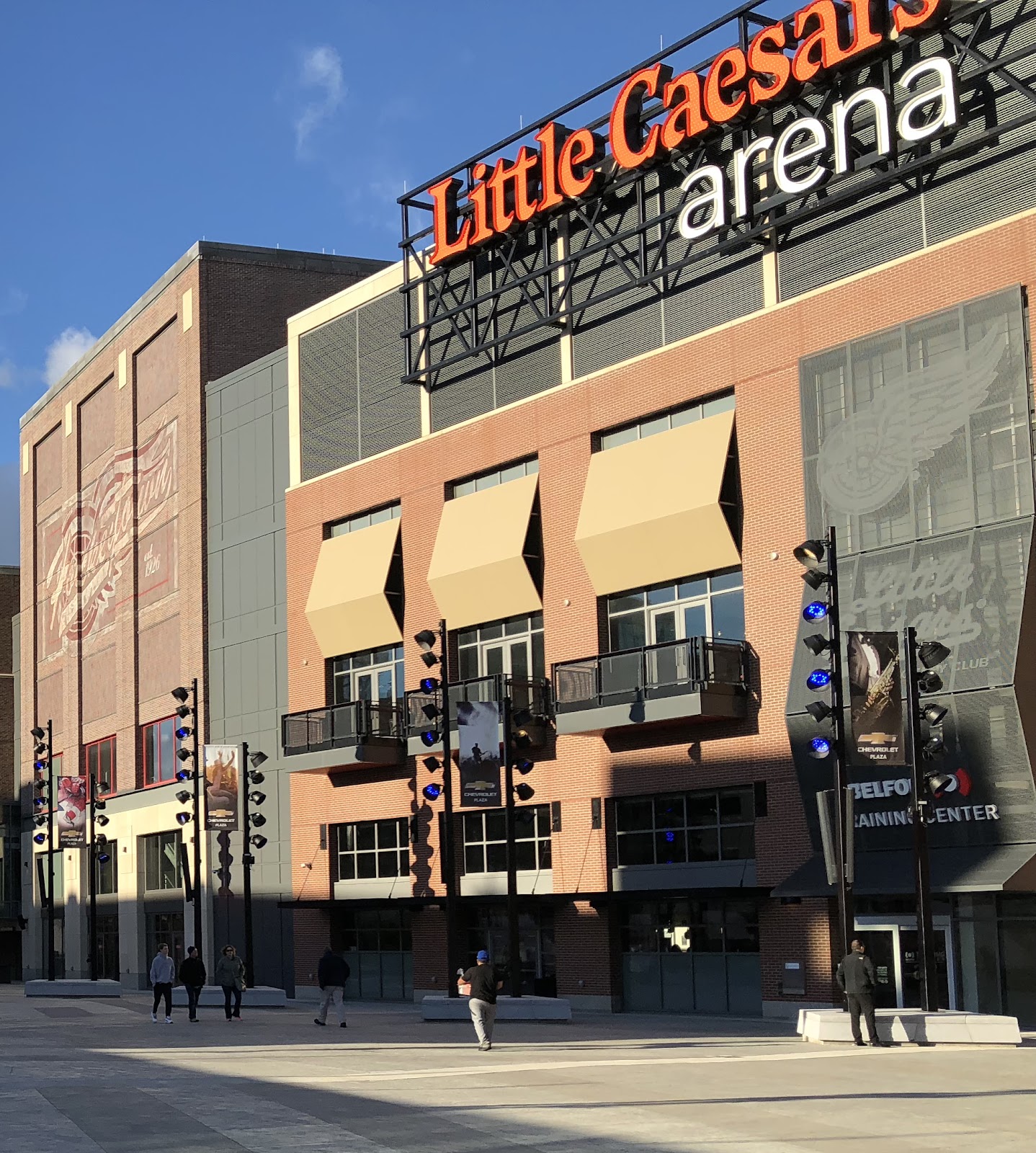 The starkest contrast between the Pistons’ new digs and their old ones, The Palace of Auburn Hills?

The Palace, which opened in 1988 and was the site of several Iverson-era playoff series between the Sixers and Pistons, was about a 30-minute drive north of Detroit, in a relatively posh suburb.

Little Caesars Arena, on the other hand, is now an anchor establishment for the up-and-coming ’District Detroit’ neighborhood.

It’s like what Brooklyn and Queens are to New York, and what Northern Liberties and Fishtown have become to Philadelphia – an area full of rehabbed buildings, new construction, trendy restaurants, and plenty of investment dollars. 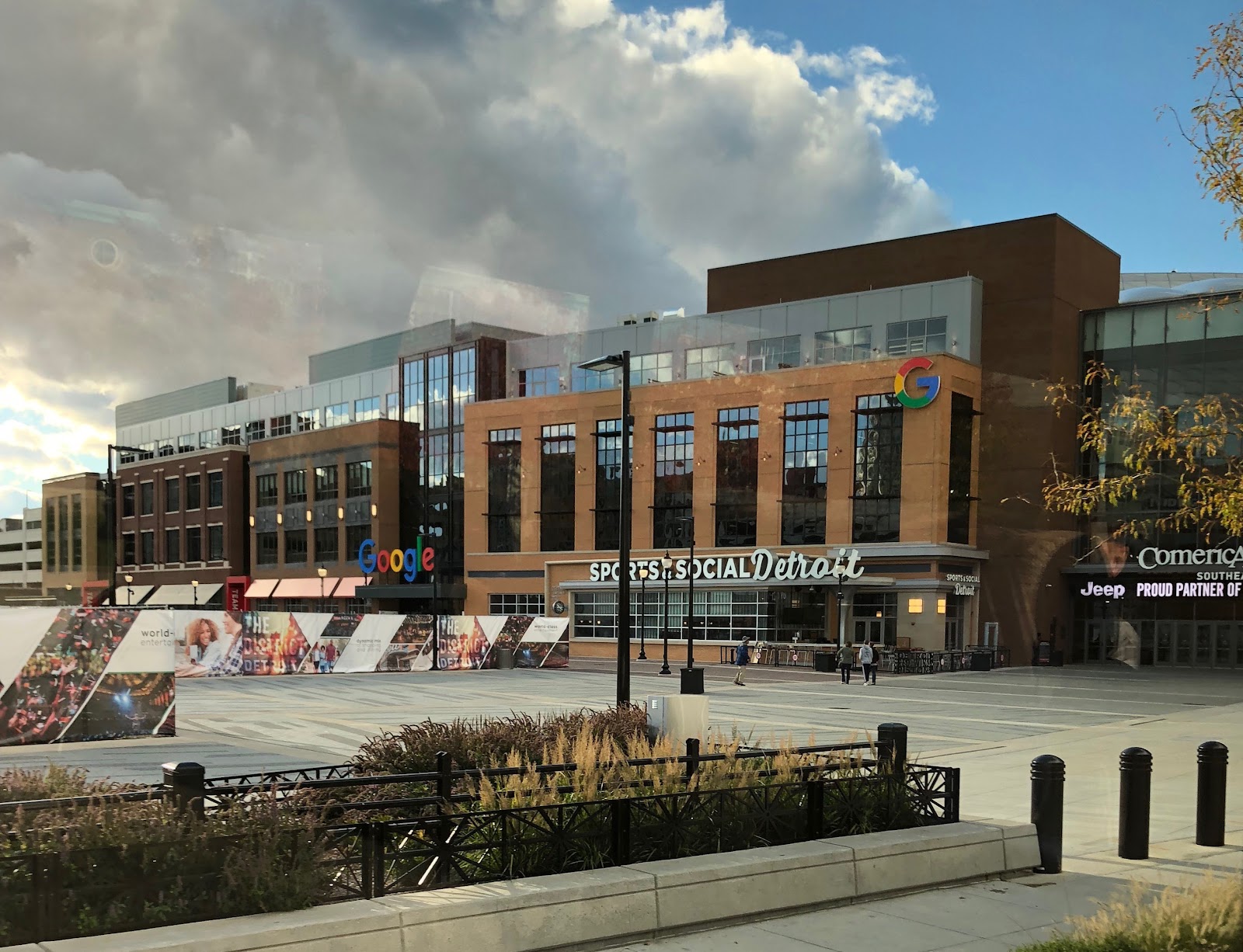 Also worth noting about Little Caesars Arena is its proximity to Detroit’s other two pro sports venues – Comerica Park (Tigers of MLB) and Ford Field (Lions of NFL). You can see the tops of both stadiums from Little Caesars Arena’s Chevrolet Plaza, a nice open-air space that feeds into one of the entrances of the building.

As the above photos show, Little Caesars Arena has a very classic exterior look – straight, sharp edges, with a bunch of red bricks. The feel is appropriate, with plenty of apropos blue collar, midwestern undertones.

The interior of the building, though, reveals a much more modern infrastructure. The arena bowl itself is actually a separate, curved structure, connected to the brick exterior with rounded glass panes. 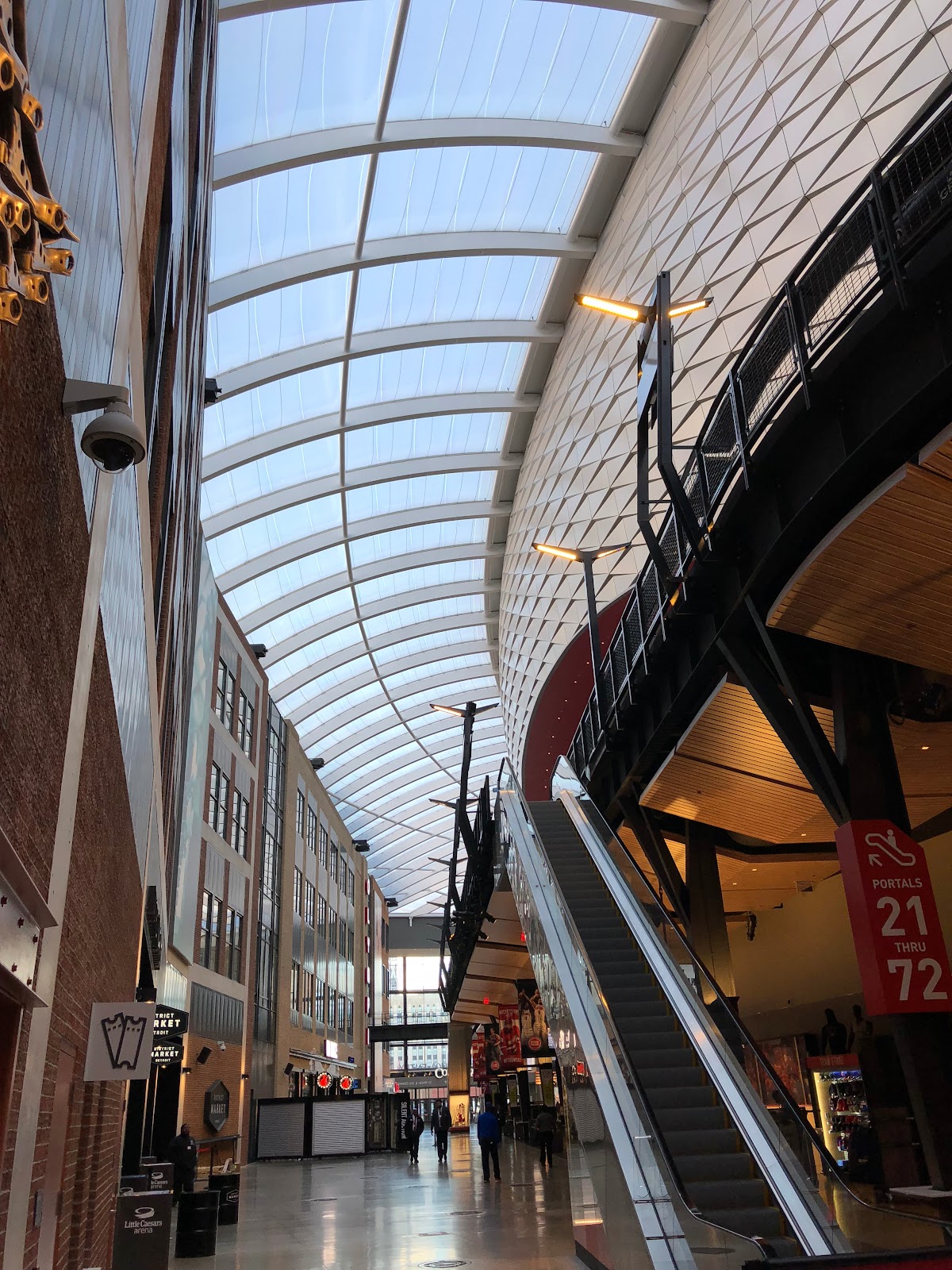 Not only does the exterior and interior architecture create a cool blend of styles, the windows that make up part of the roof bring in lots of bright, natural light. 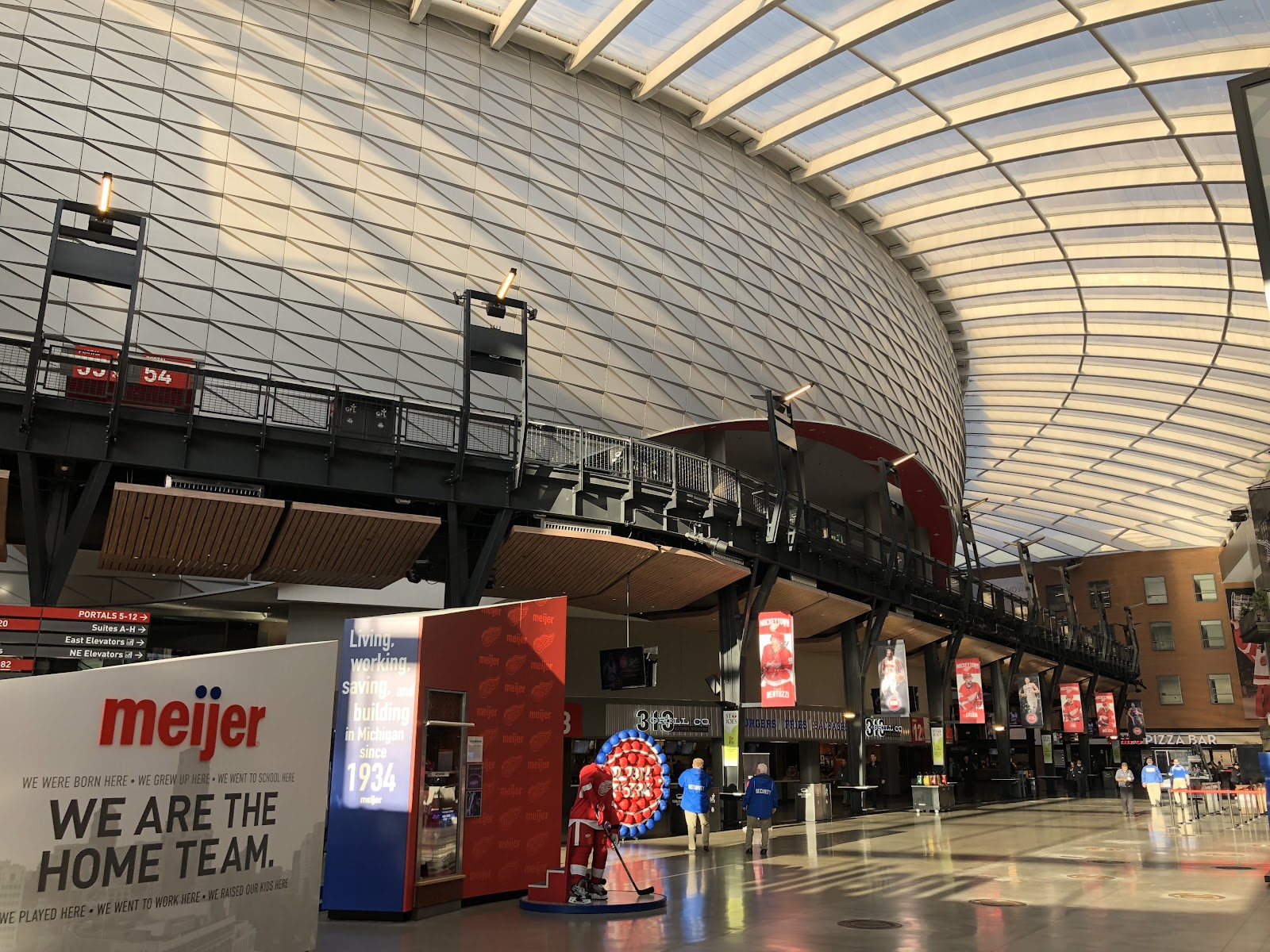 Gameday didn’t offer a ton of time to investigate Little Caesars Arena, but I did manage to get a quick stroll in.

Out of everything I saw, I think I had the most fun stumbling upon all the Detroit-inspired features that projected civic pride.

Above the Chevrolet Gate entrance, not only was there an actual Chevy affixed to part of the brick wall… 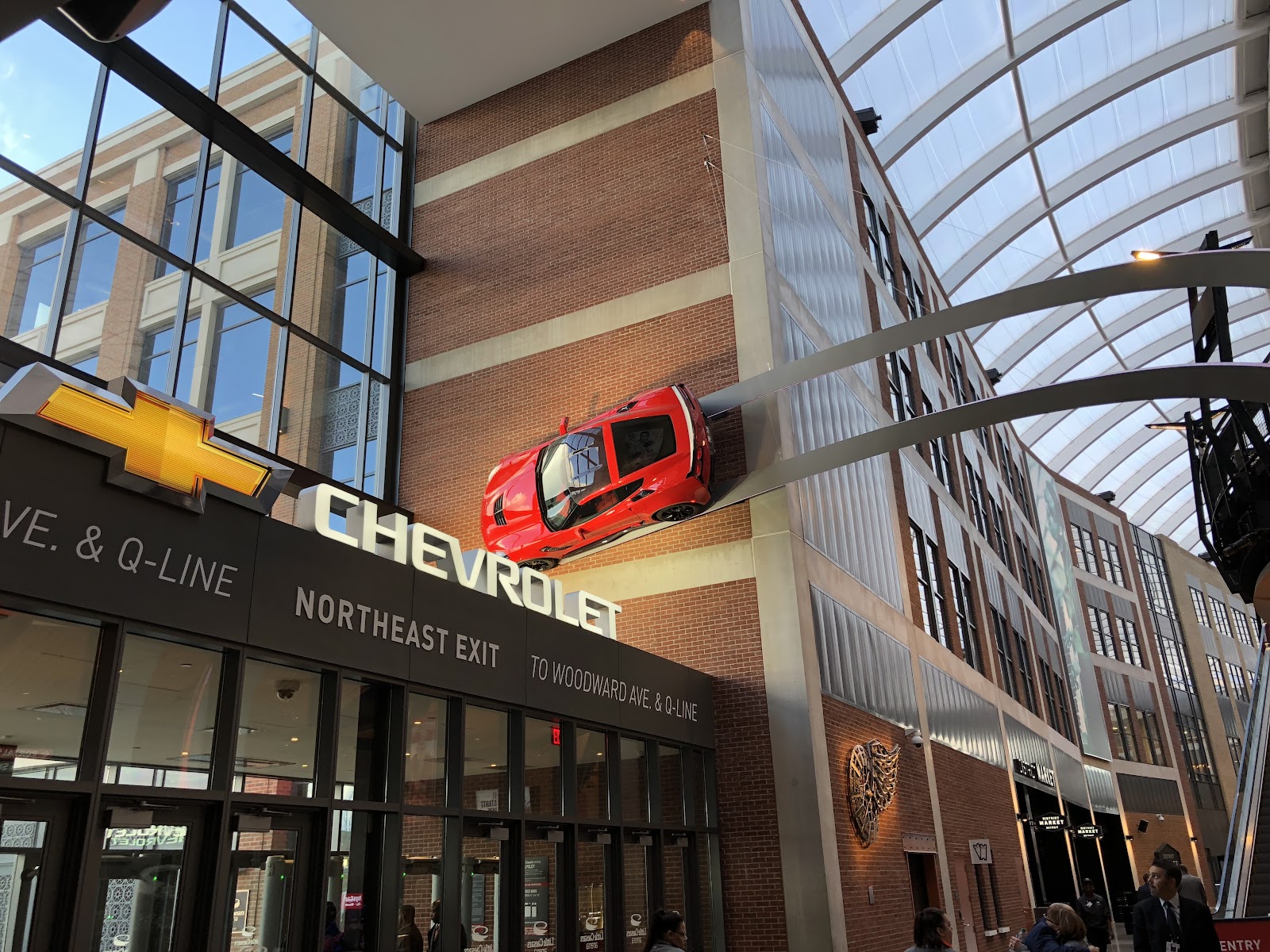 …but a sculpture of the Detroit Red Wings logo called “Wheels & Wings” that was made out of 186 auto parts from 13 different Chevrolet (part of Detroit-based General Motors) cars. The project apparently took over 700 hours to finish. 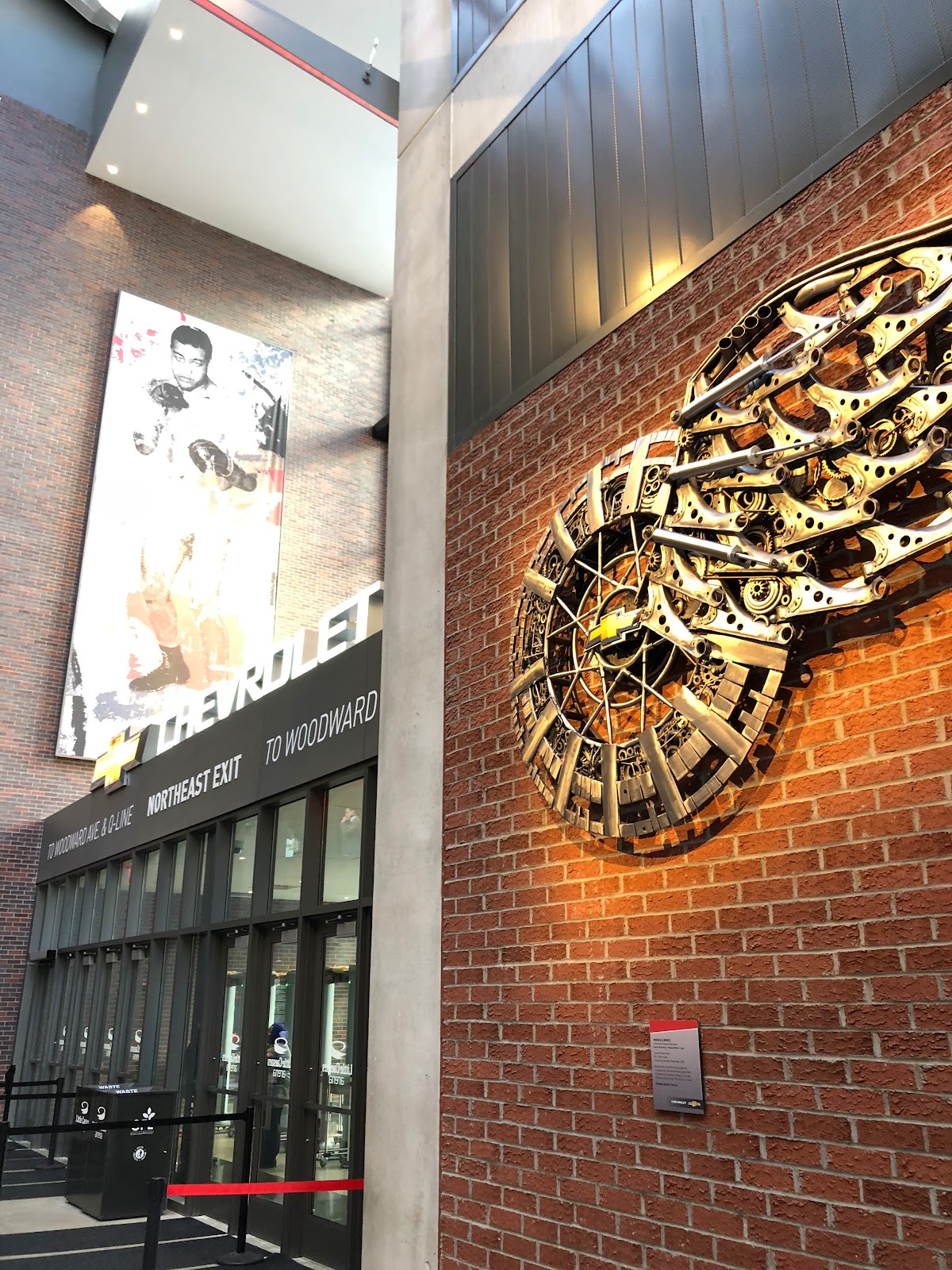 Then, placed along the concourse floor, there are these manhole covers, each one commemorating an iconic player, coach, executive, or team from Pistons or Red Wings history. 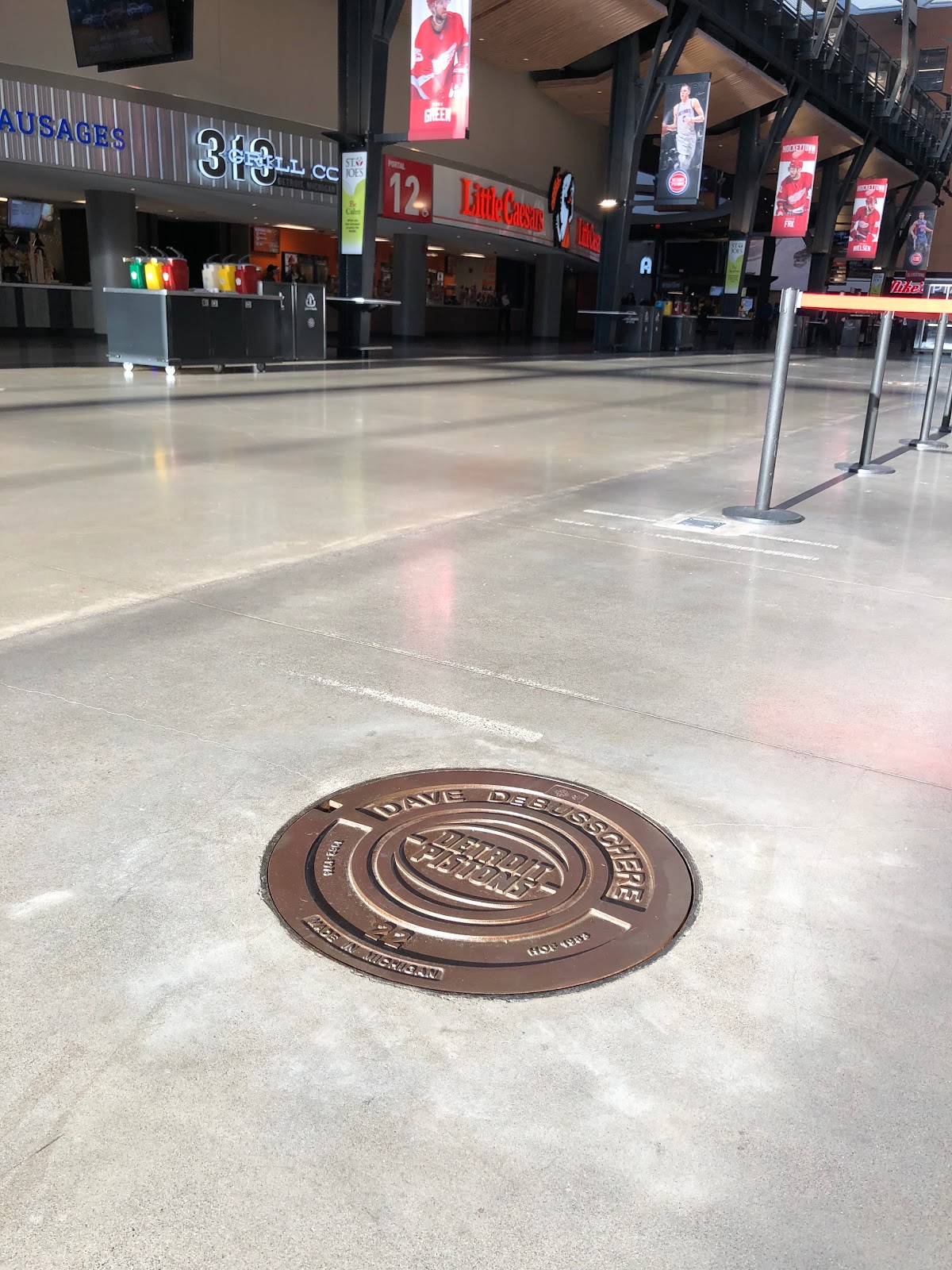 Nods to Motor City culture crossed over into the dining options, too. After all, what’s more than something associated with Kid Rock? 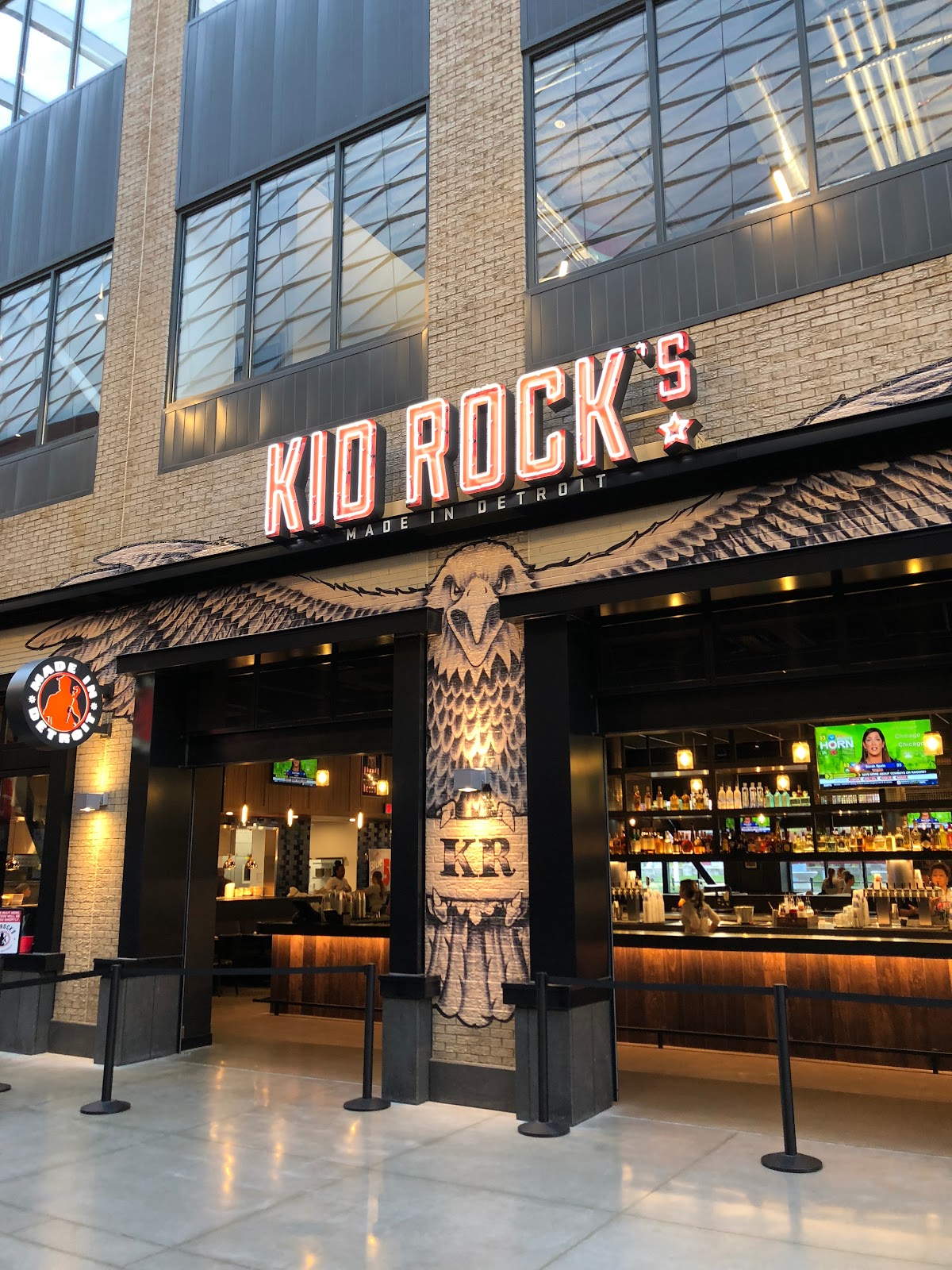 Before looking down at the actual playing court at Little Caesars Arena, it’s hard not to first gaze upward, at the venue’s 43,000-square foot ceiling, which consists of 1,700 LED light strips. The colors and design can change over the course of a game or event. 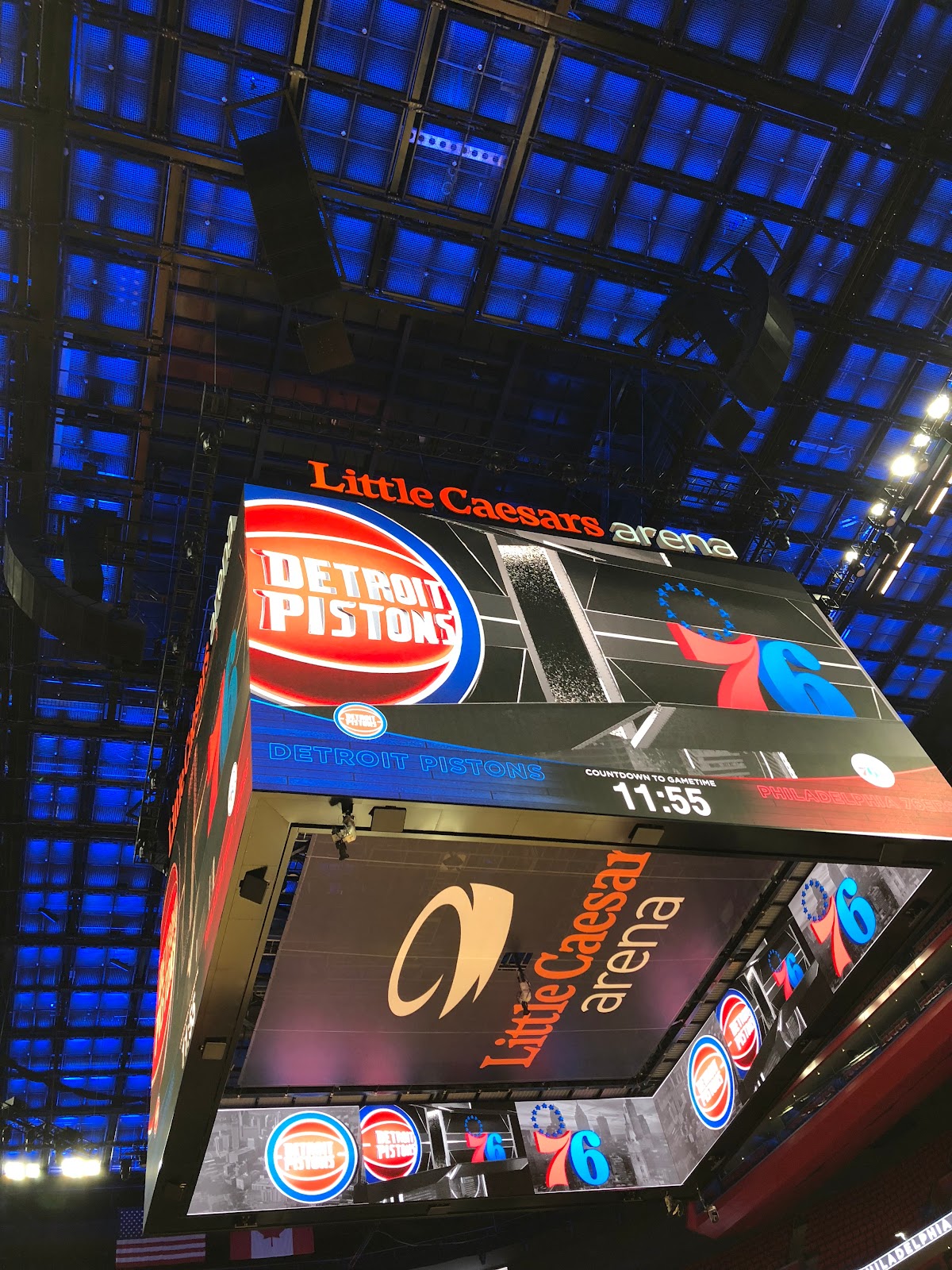 The scoreboard itself is impressive as well. Four big screens combine to form a 5,100 square-foot box, that, at the time of the arena’s opening, was the largest “center-hung” scoreboard ever built.

For a 20,000-seat facility, Little Caesars Arena actually felt cozy enough. Unfortunately, the night the Sixers were there, the crowd was somewhat sparse. 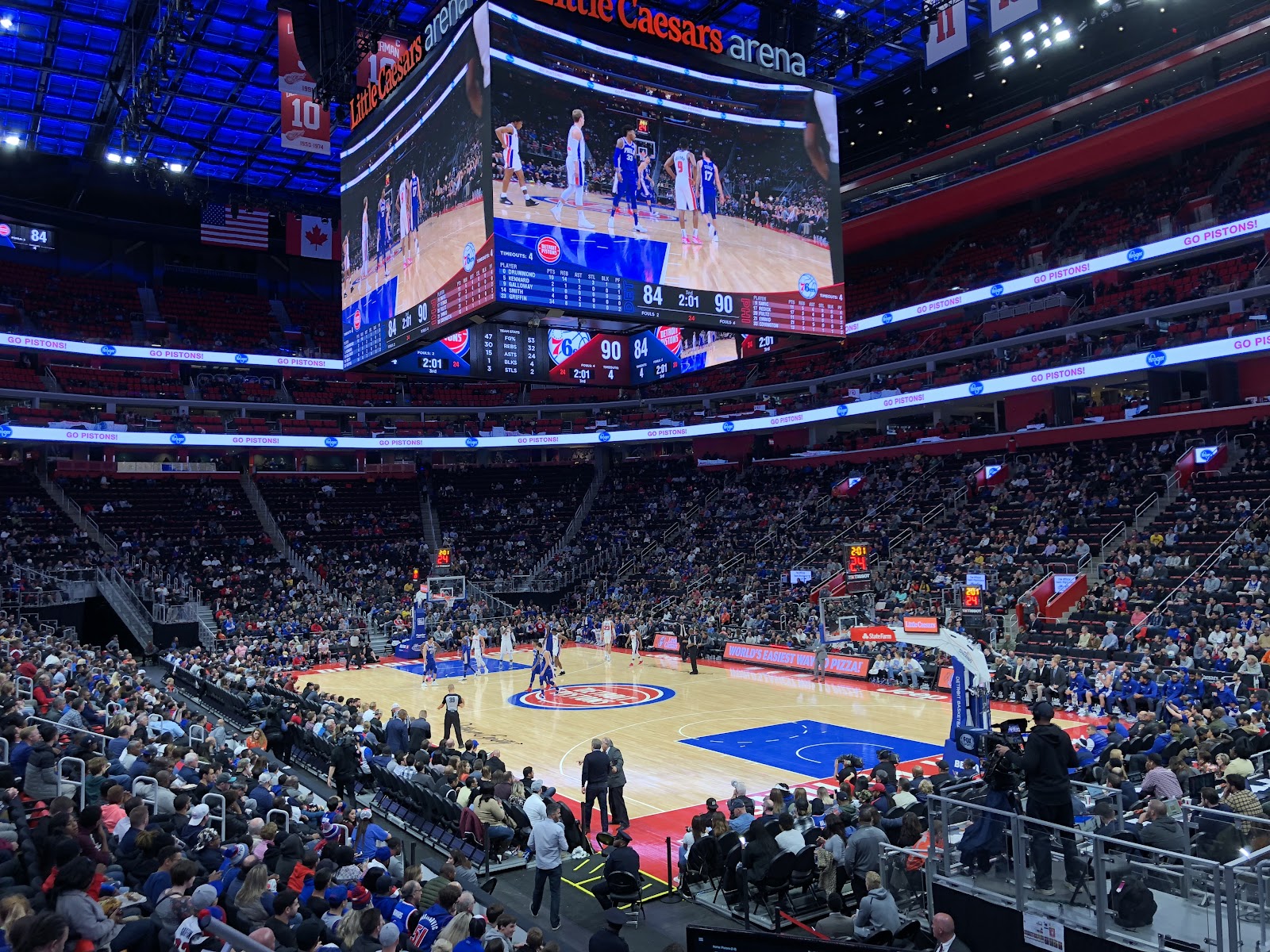 Next Time I Go…

I’d love to check out the upper level gondolas, which, despite being up pretty high, apparently offer neat views of the action. 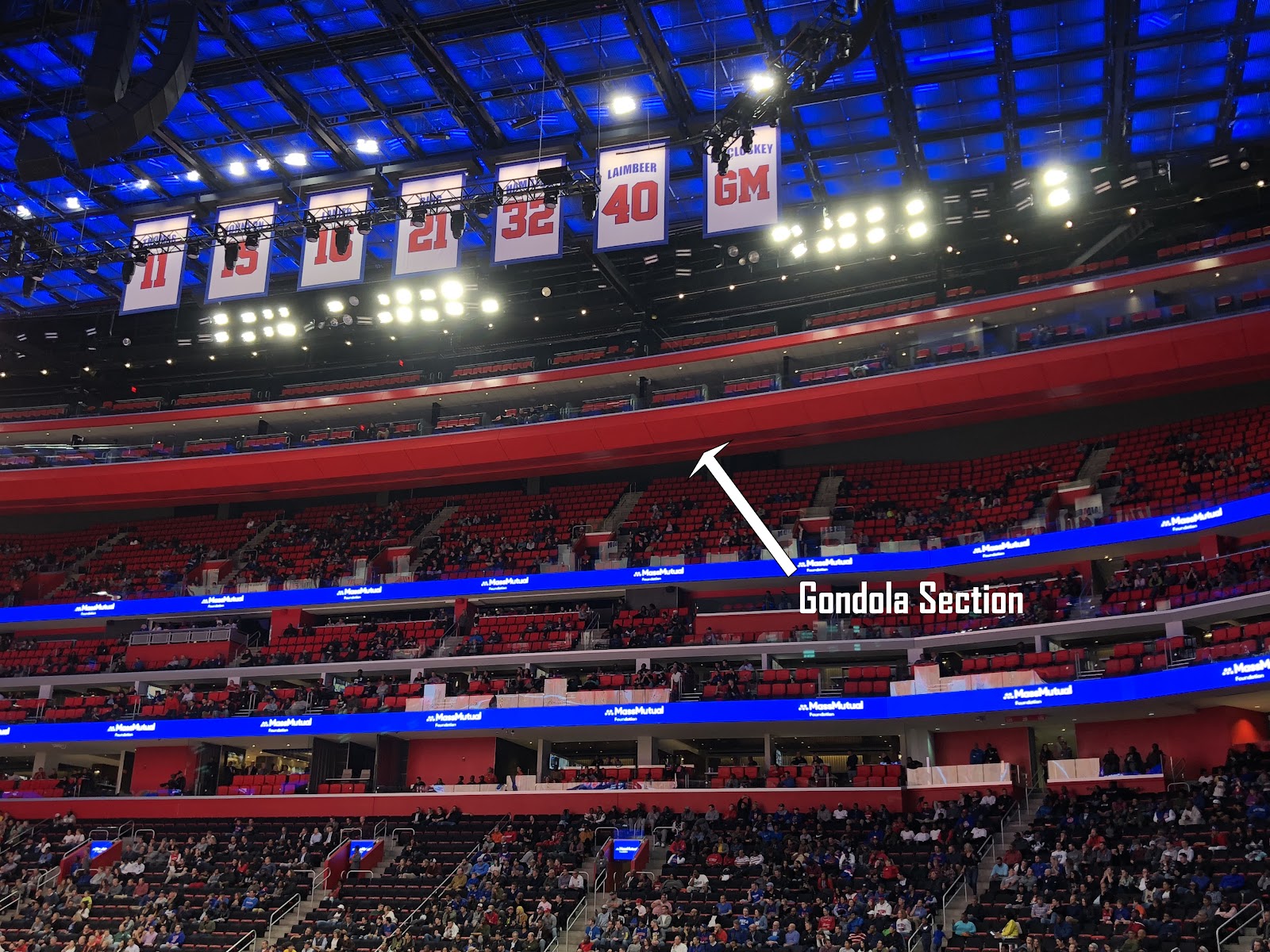 Maybe that’ll be my move for (at least a portion of) the Sixers’ second and final regular season game at Little Caesars Arena, a December 5th nationally-televised appearance on ESPN. 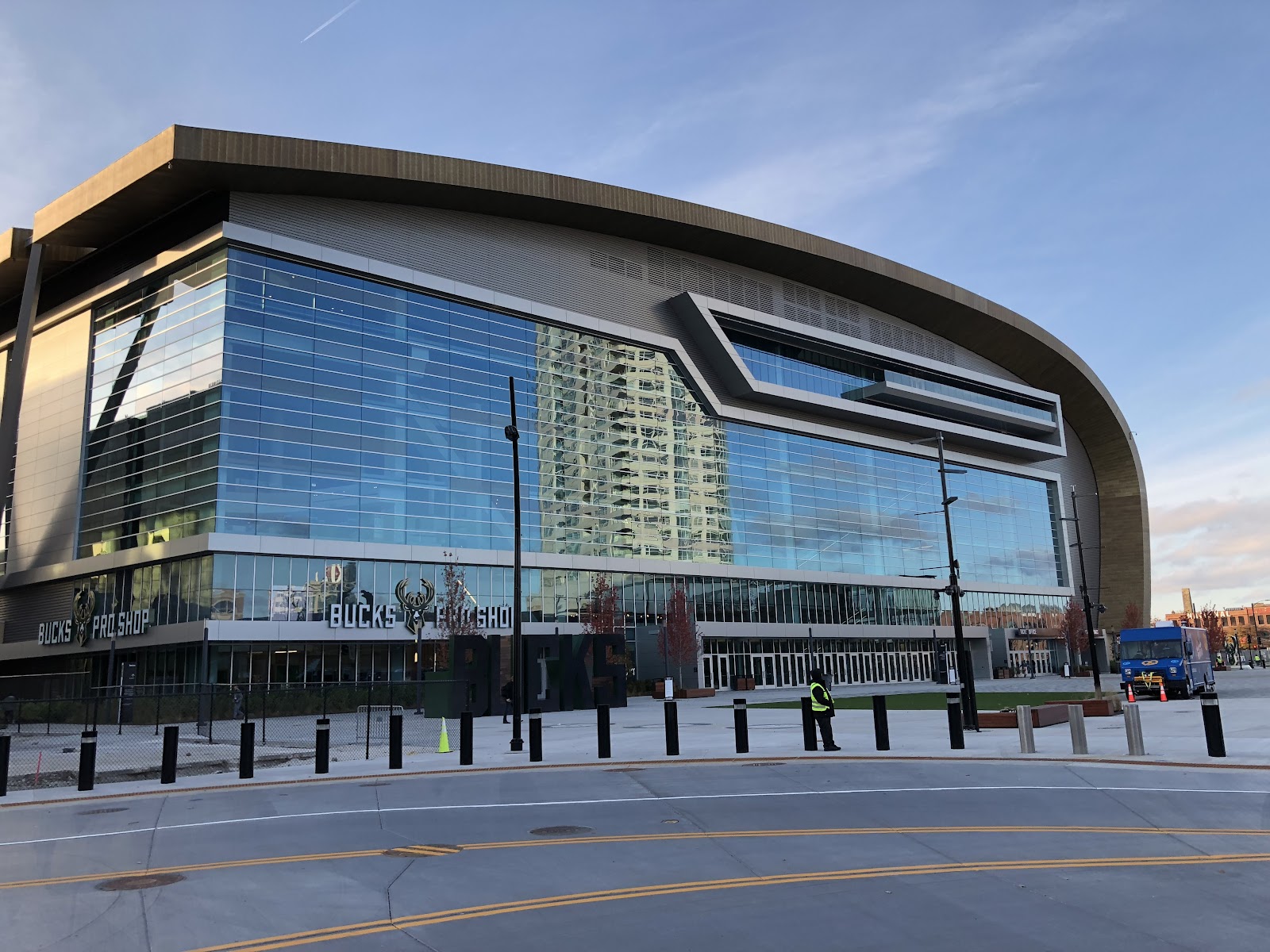 Google Maps told me it was about a mile from the team hotel to fiserv.forum. The early fall afternoon was crisp (temperatures topping out in the low 50s that day), but still pleasant enough.

So, I decided to hoof it to the arena, and was glad that I did.

The 20-minute walk was really nice. It took me from the the revived Historic Third Ward district… 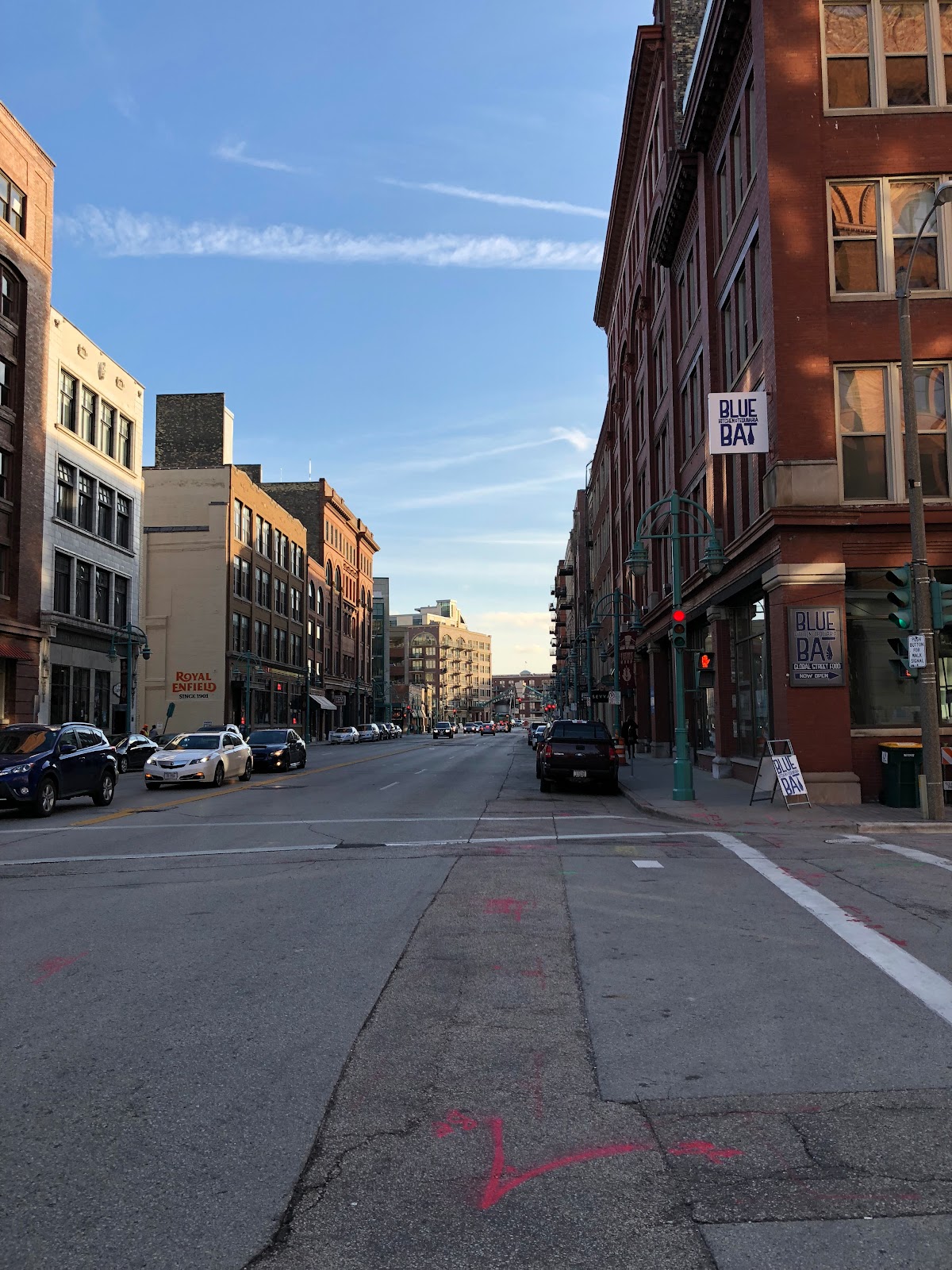 ….north along the Milwaukee River that runs through the heart of downtown… 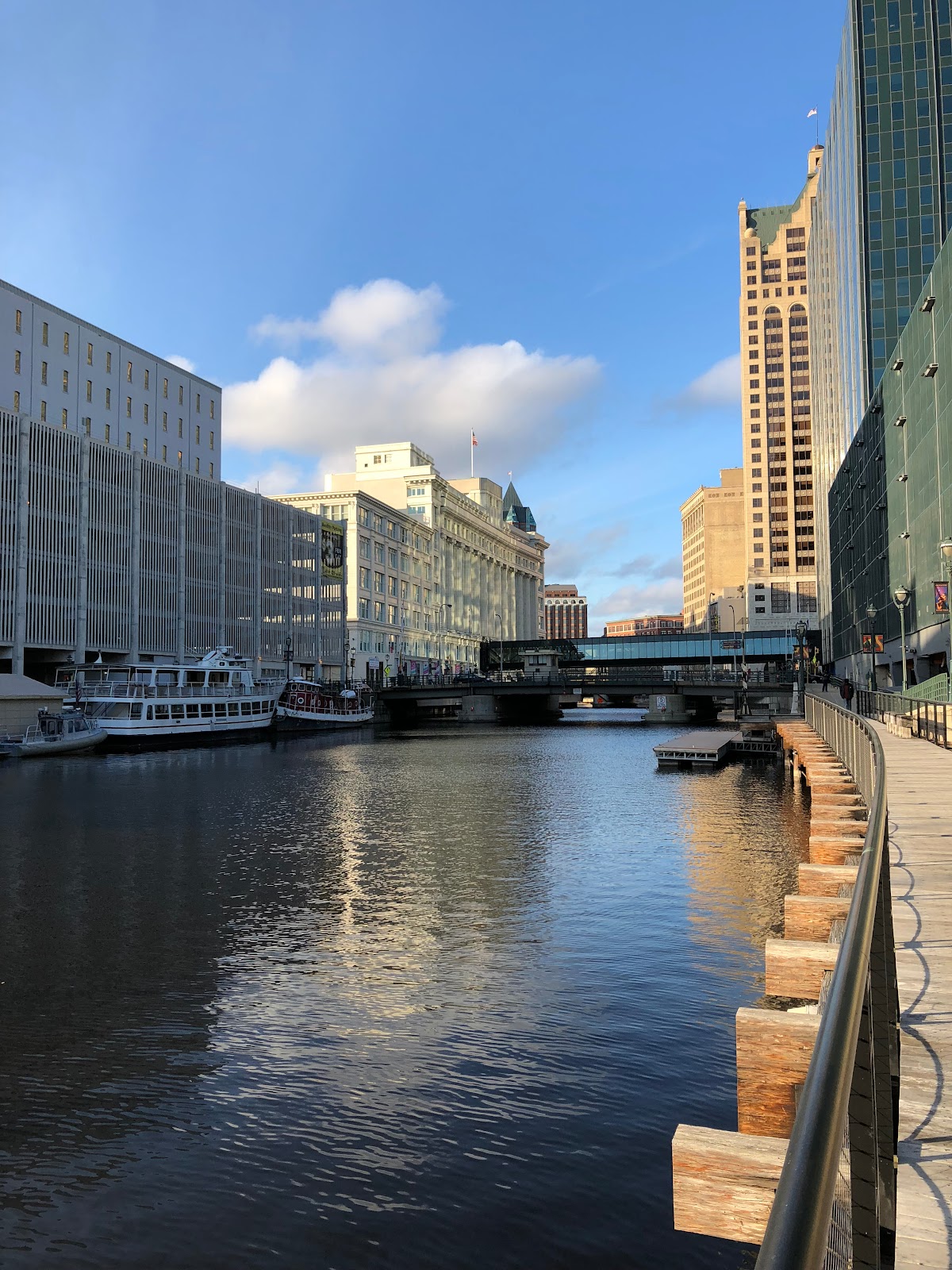 … and past Pere Marquette Park. 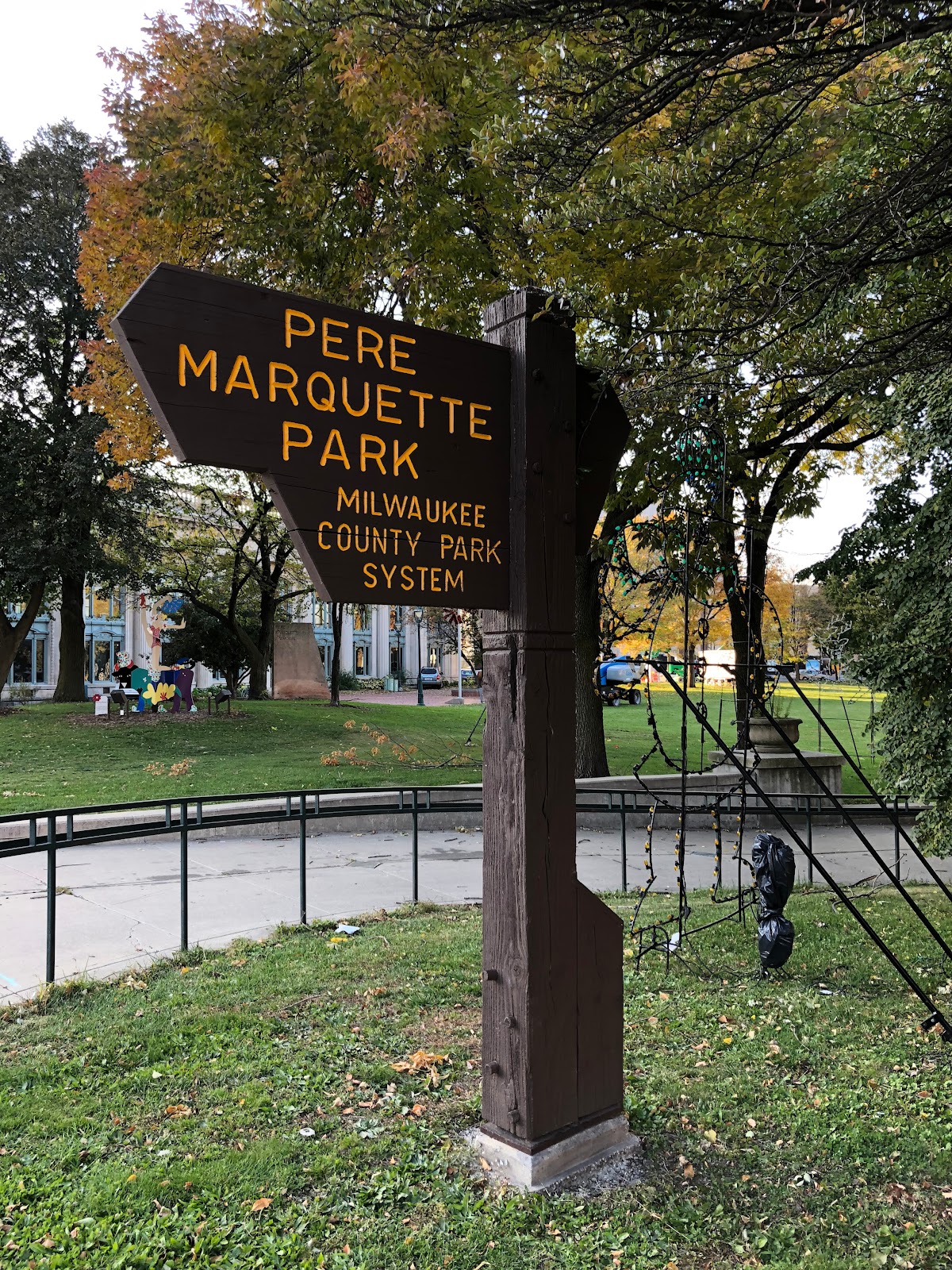 Fittingly, it was while I was heading down ‘Old World’ North 3rd Street, past the iconic Mader’s German restaurant (est. 1902), that I saw first caught a glimpse of the newest school venue in professional basketball.

fiserv.forum may have only been partially peeking from in between the handful of far more traditional-style buildings in downtown Milwaukee, but man, did its beaming glass facade and curved, copper-colored, wooden-looking roof grab your attention immediately. 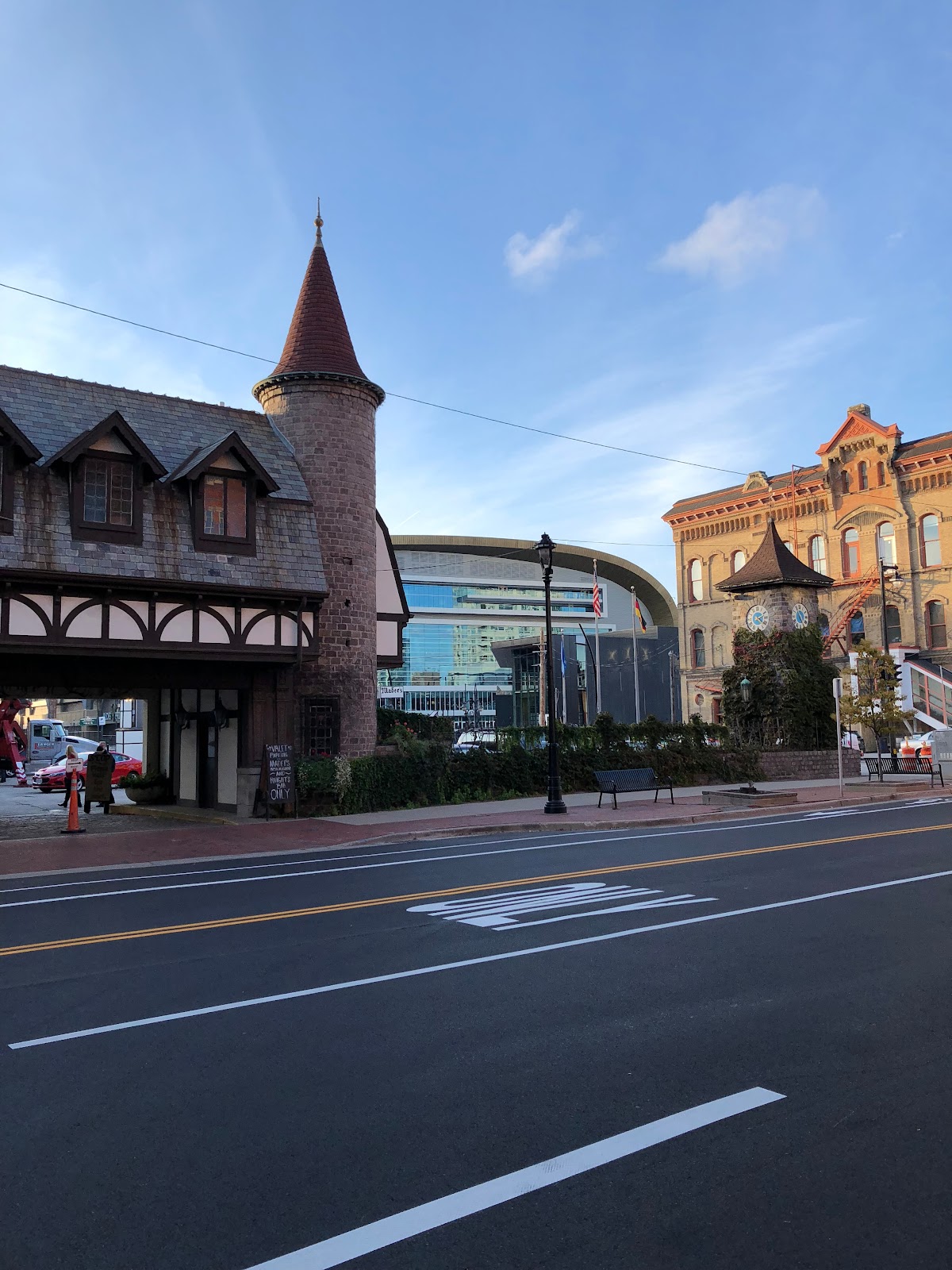 After turning onto Highland Avenue and reaching the arena’s entrance, a handful of Bucks branded items came into view. One of them was this sculpture, located at the head of a plaza that joined the ground the arena was built on to a nearby entertainment complex still under partial construction. 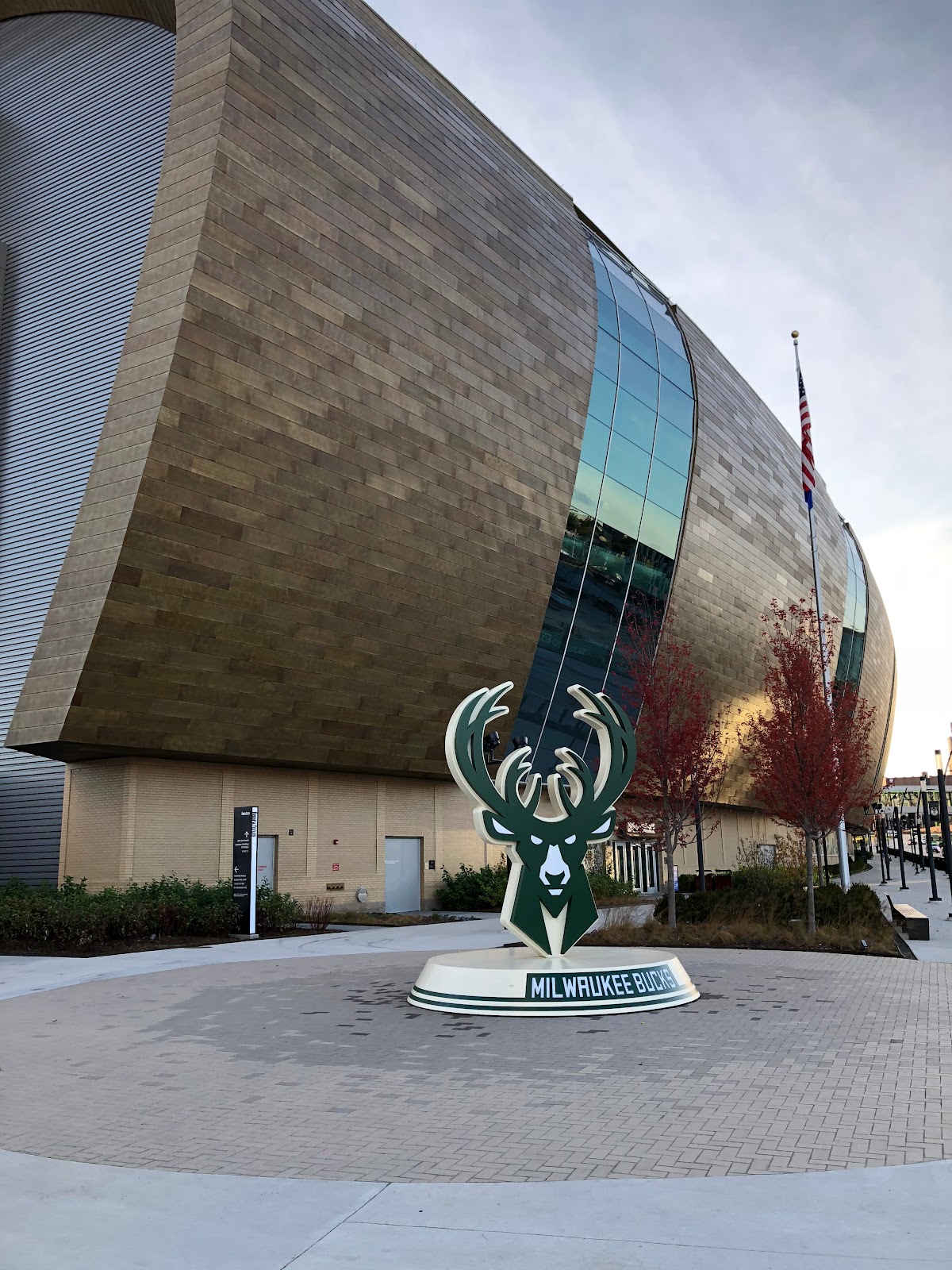 A little bit farther up the street, I passed a mini-mural along along the north side of the arena. The artwork depicted lots of Milwaukee nostalgia. 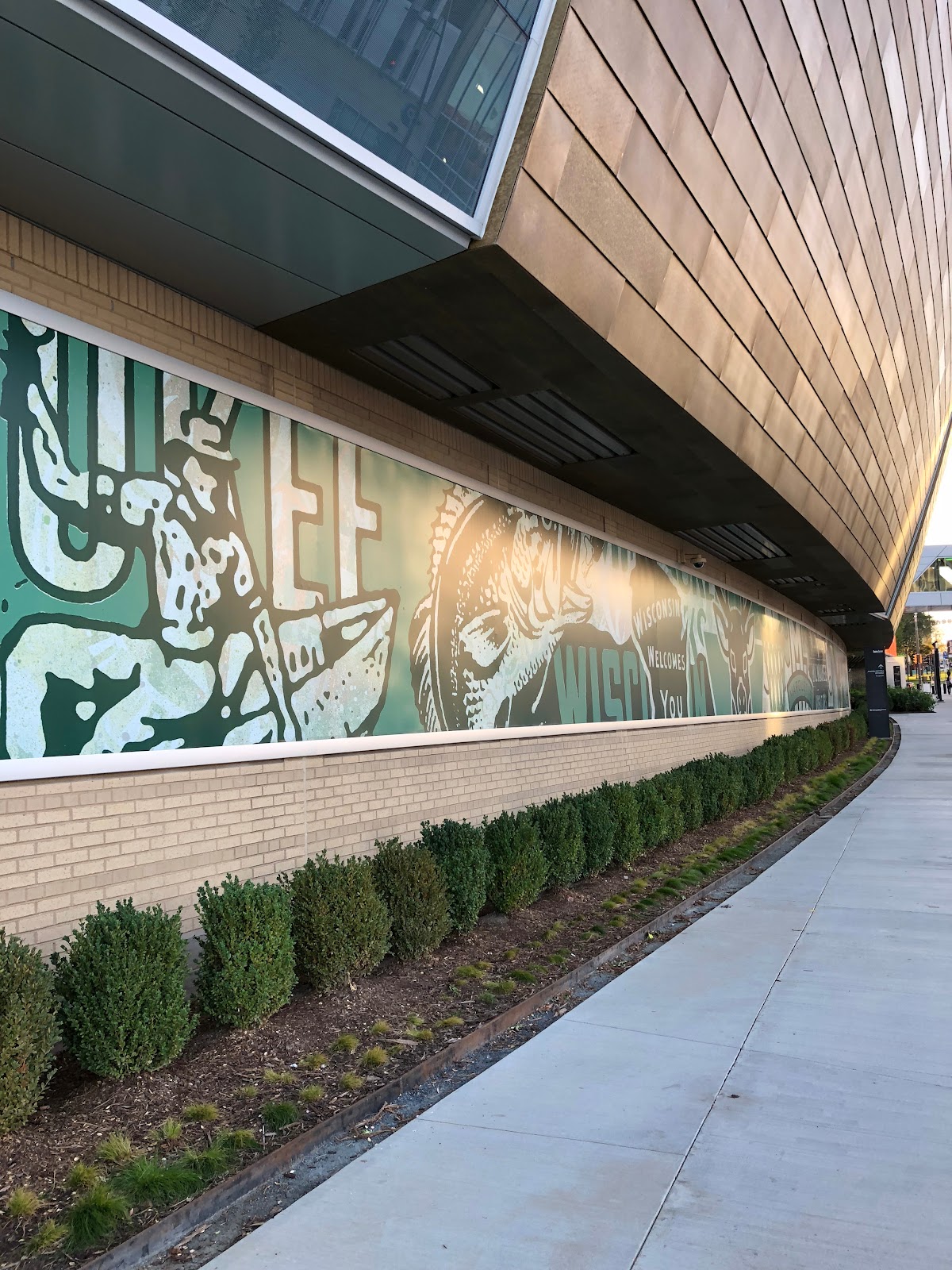 By the time I reached the end of the block, I was, yes, kind of cold, but more than that, pumped to see what was inside.

Sparkling Fresh, Starting at the Top

The very first thing that hit me about fiserv.forum was its smell. Less than two months old, the place still had a super fresh scent, the kind created by construction materials.

After being tight on time in Detroit, I made sure to get to fiserv.forum early enough to allow for some solid exploration.

When I got to the 100 level concourse, I first came across this steep escalator that enticed me upward towards the very futuristic looking Panorama Club at the tippy-top of the building. 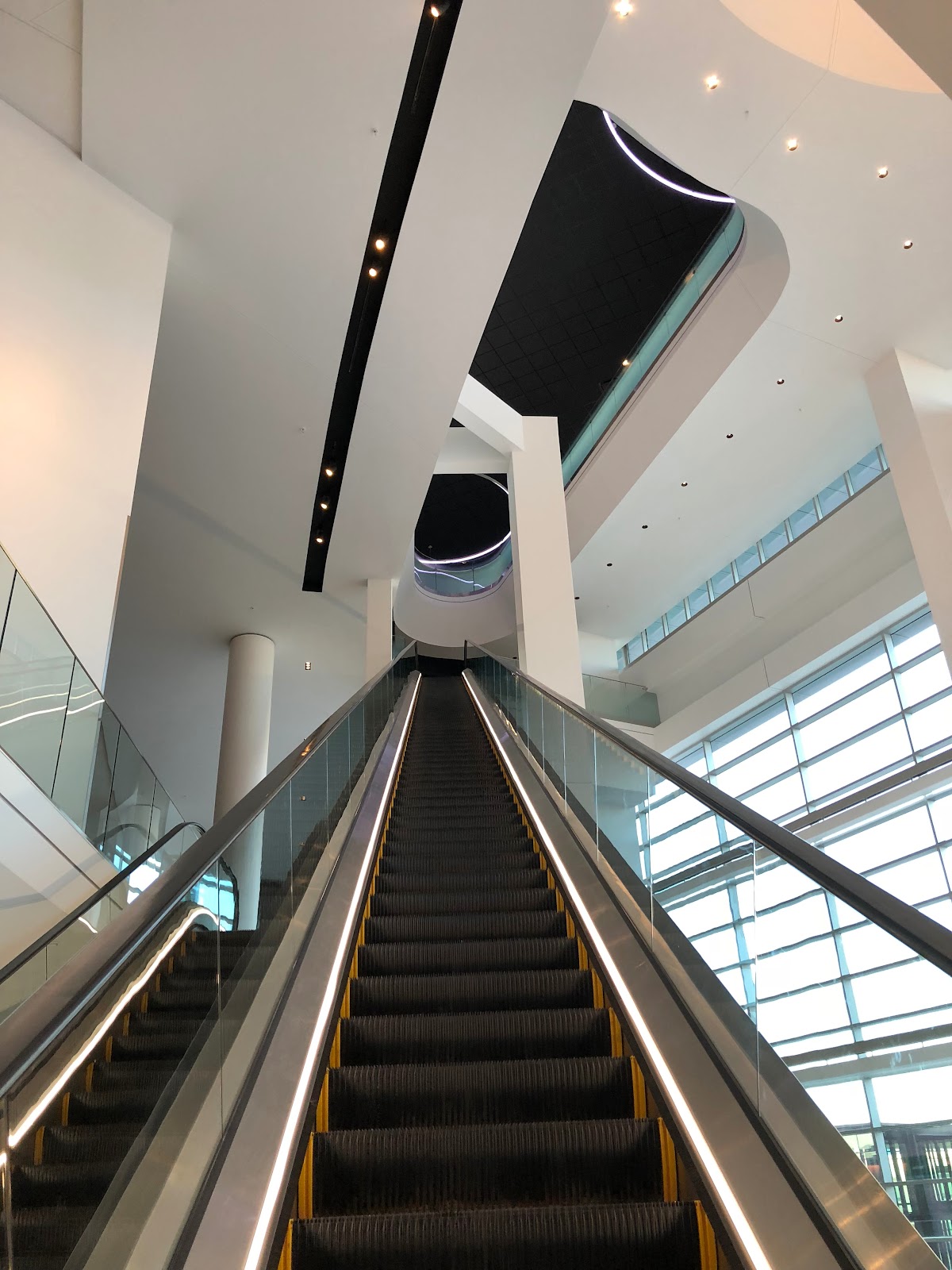 What do you do when you’re in a place called the Panorama Club? Take a panoramic picture, of course.

True to the last part of its name, the Panorama Club has every bit the feel of a club, from its carpeted flooring, shiny lights, and lounge-style seating. You won’t find traditional chairbacks in this space, which is meant primarily for the standing-room-only crowd.

What you will find, however, is a terrific view of the Milwaukee skyline, and an outdoor balcony on the side of the Panorama Club opposite the court. 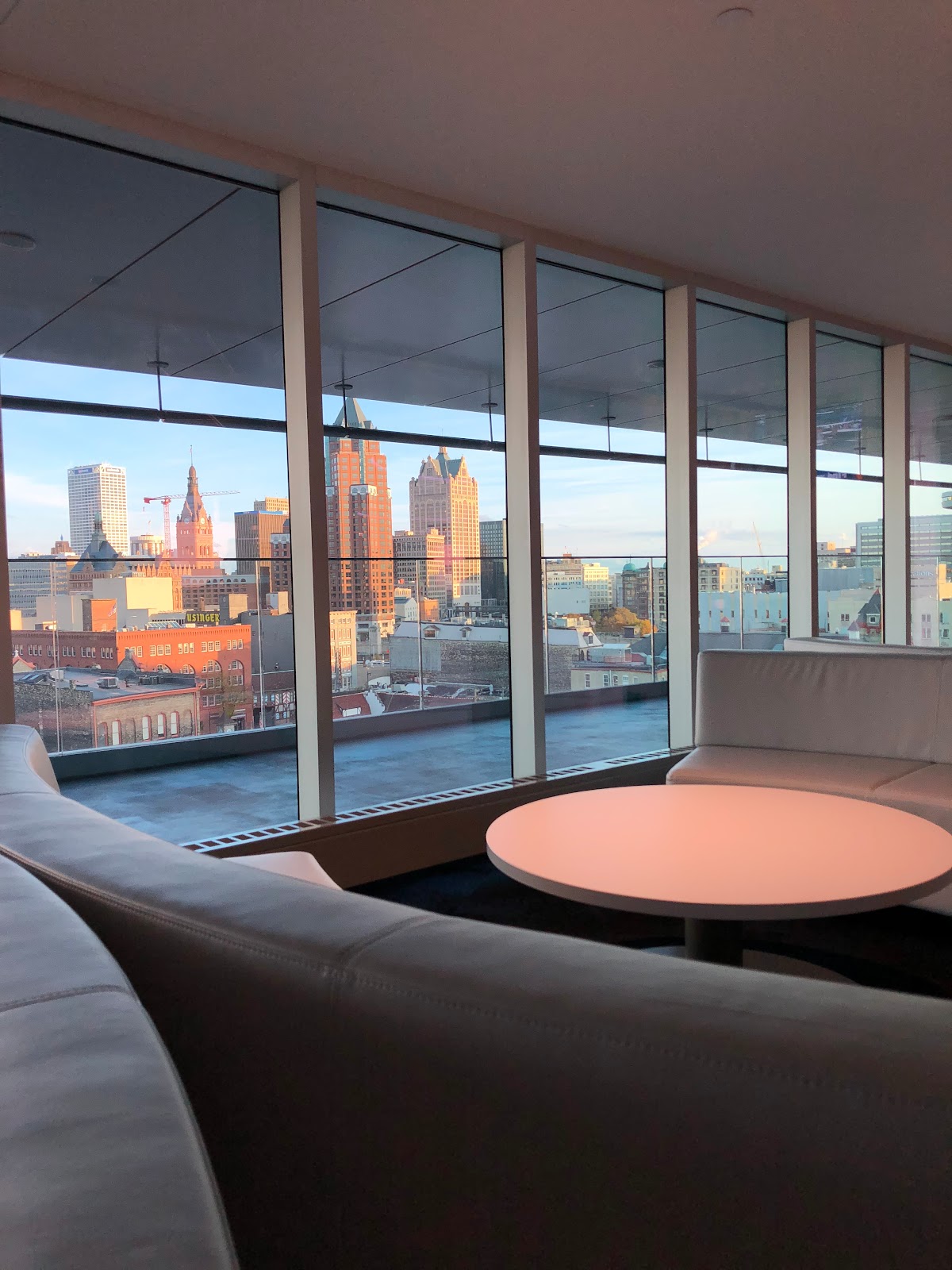 It may have been located in the highest accessible part of the arena, but the Panorama Club, for me, was one of the most distinct aspects of fiserv.forum.

I headed down a staircase to the 200 section, which, despite being the second level, offered good sightlines. In general, whether up there, or in the 100 level, there were few places on either of the fiserv.forum concourses where you didn’t have at least a partial view of the court. 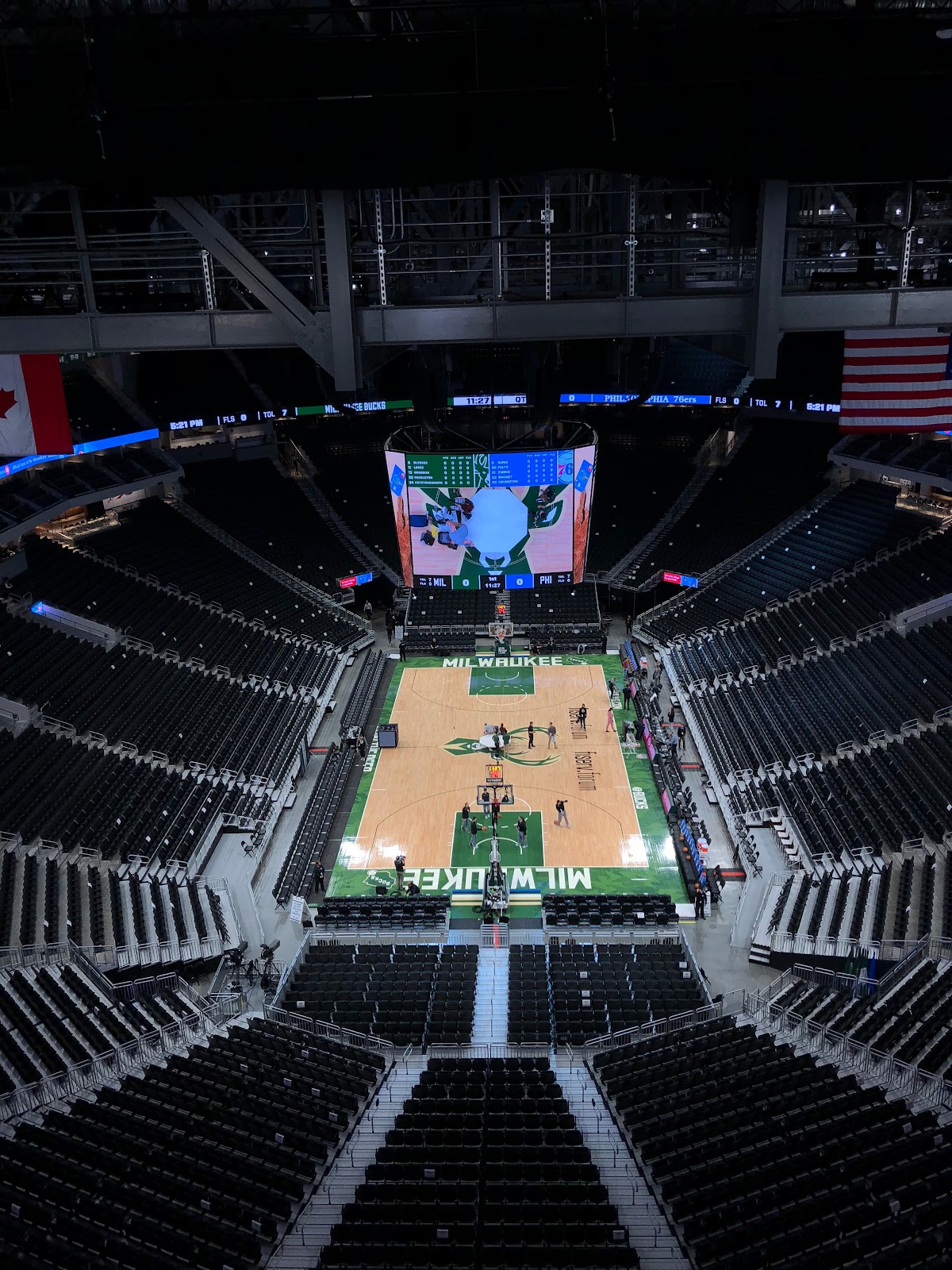 Had it been open for business while I was walking around, I would have grubbed at the fiserv.forum Southside Market. This 200 level dining area featured some local favorites, like Klements (sausage) and Cedar Crest Ice Cream, plus other enticing stands that specialized in fare like mac and cheese, grilled cheeses, and gyros. 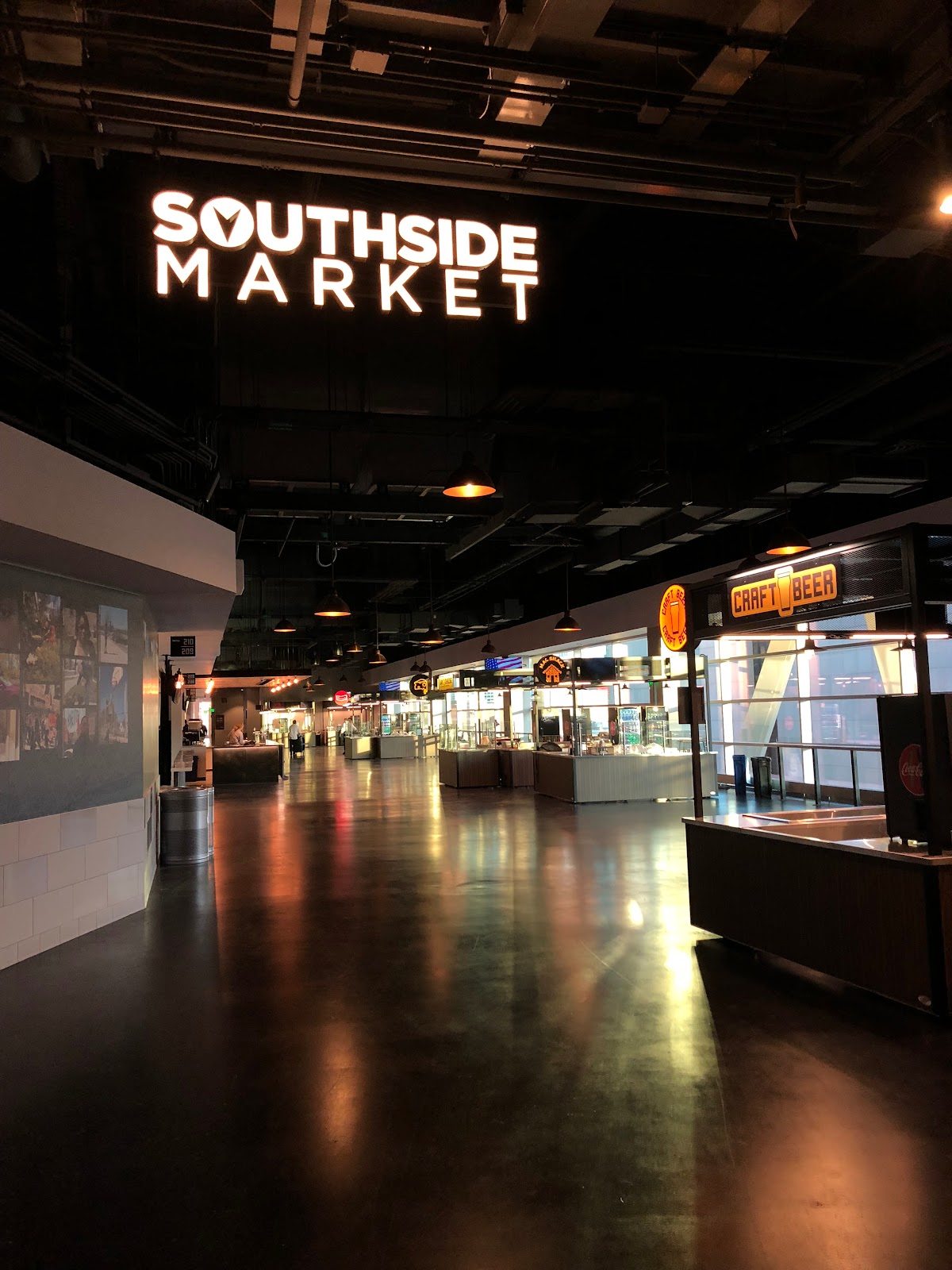 Luxury to be Found

To get back down to the main concourse, I once again took the escalator on the east, glass-facing side of fiserv.forum. Going down offered a neat look at all the different levels of the arena, and with the sun setting, there was a nice glow to that part of the arena. 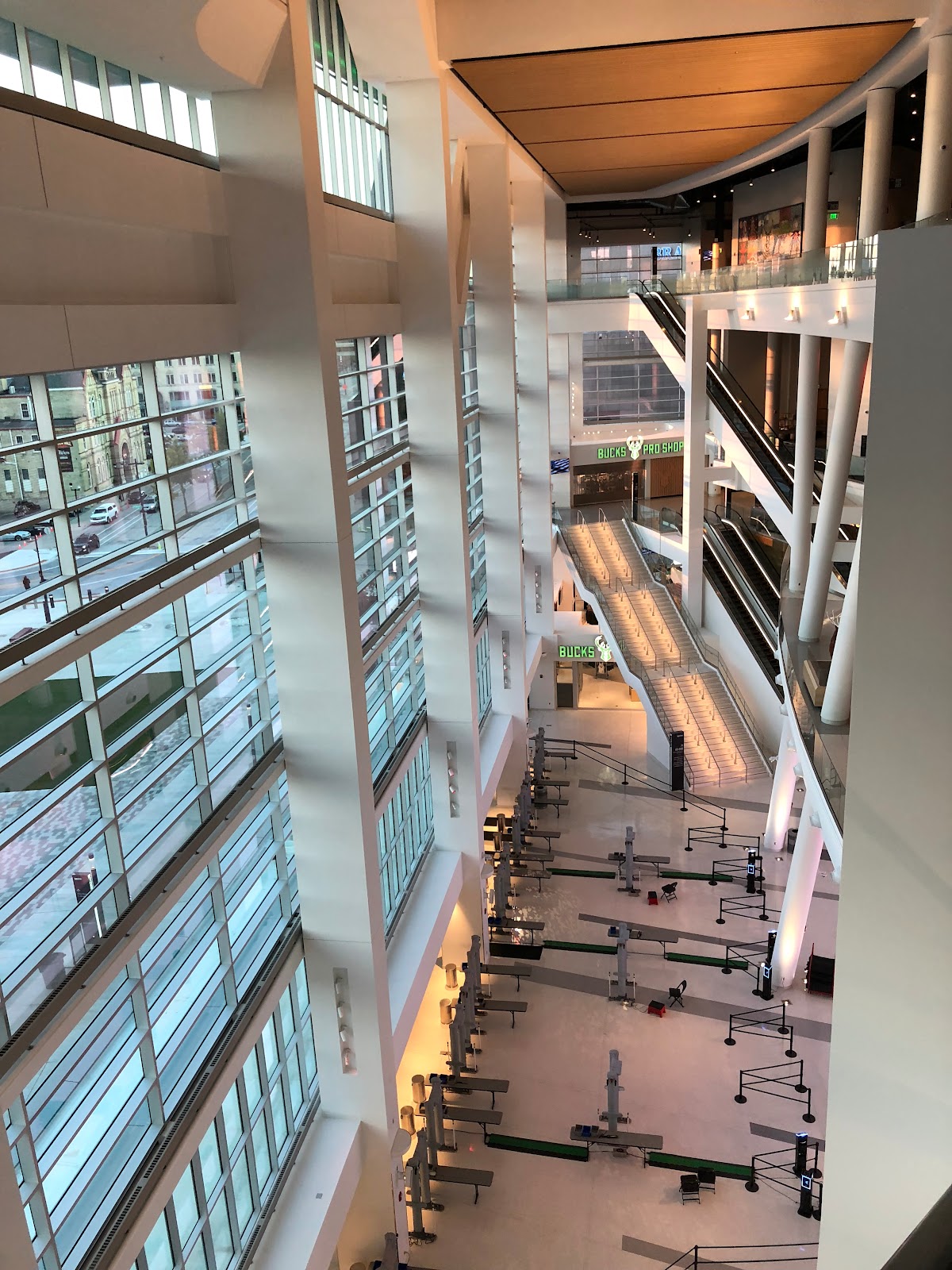 I hopped off the escalator at a premium seating section called the West Bend Lofts. I’m by no means a design expert, but words that come to mind to describe this area are hip, high-end, and cattle ranch. 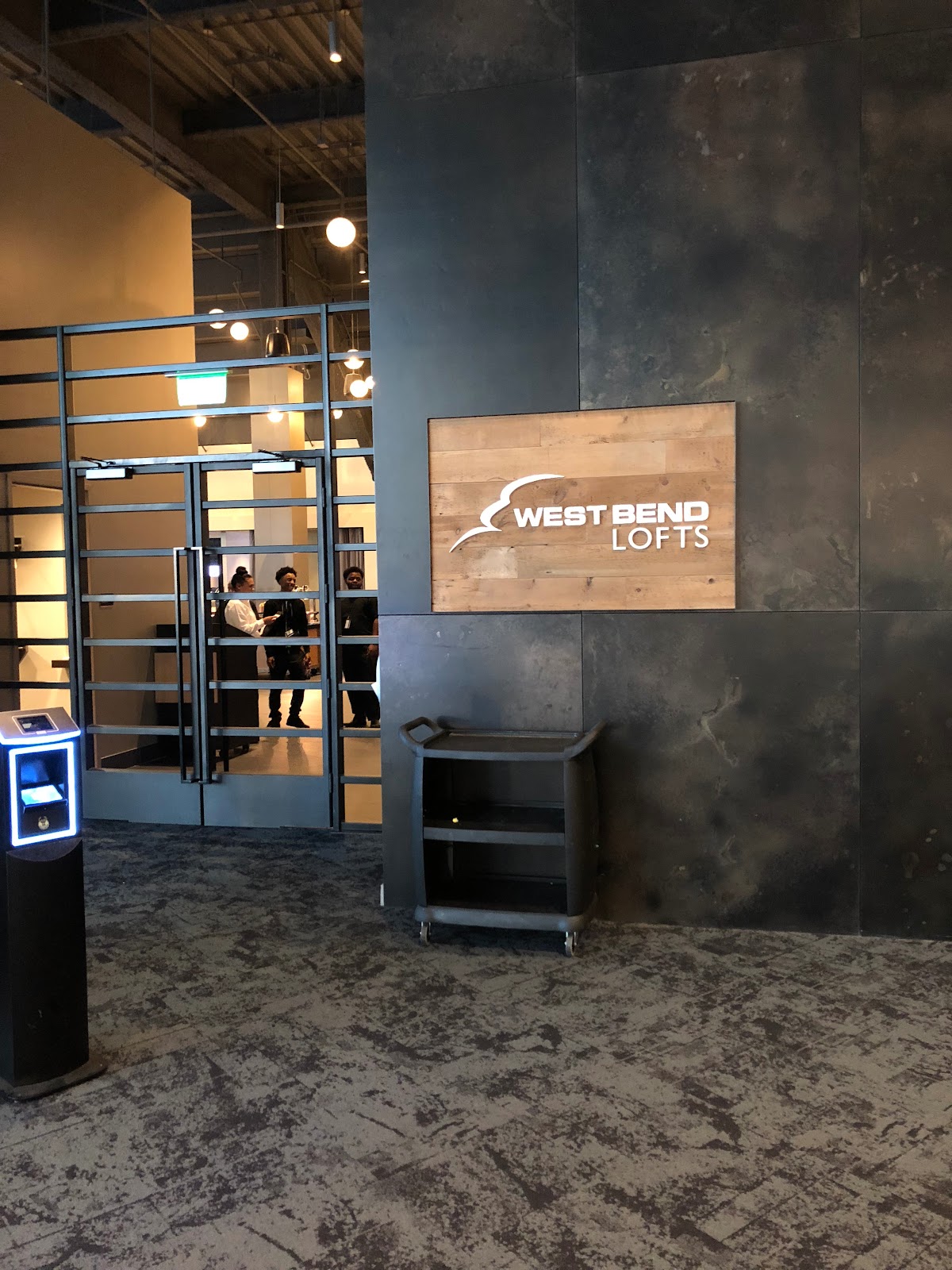 A large dining space inside the West Bend Lofts was being set up for a pre-game event, so I took a peek inside a few of the private boxes, which were well-stocked, and very nice. 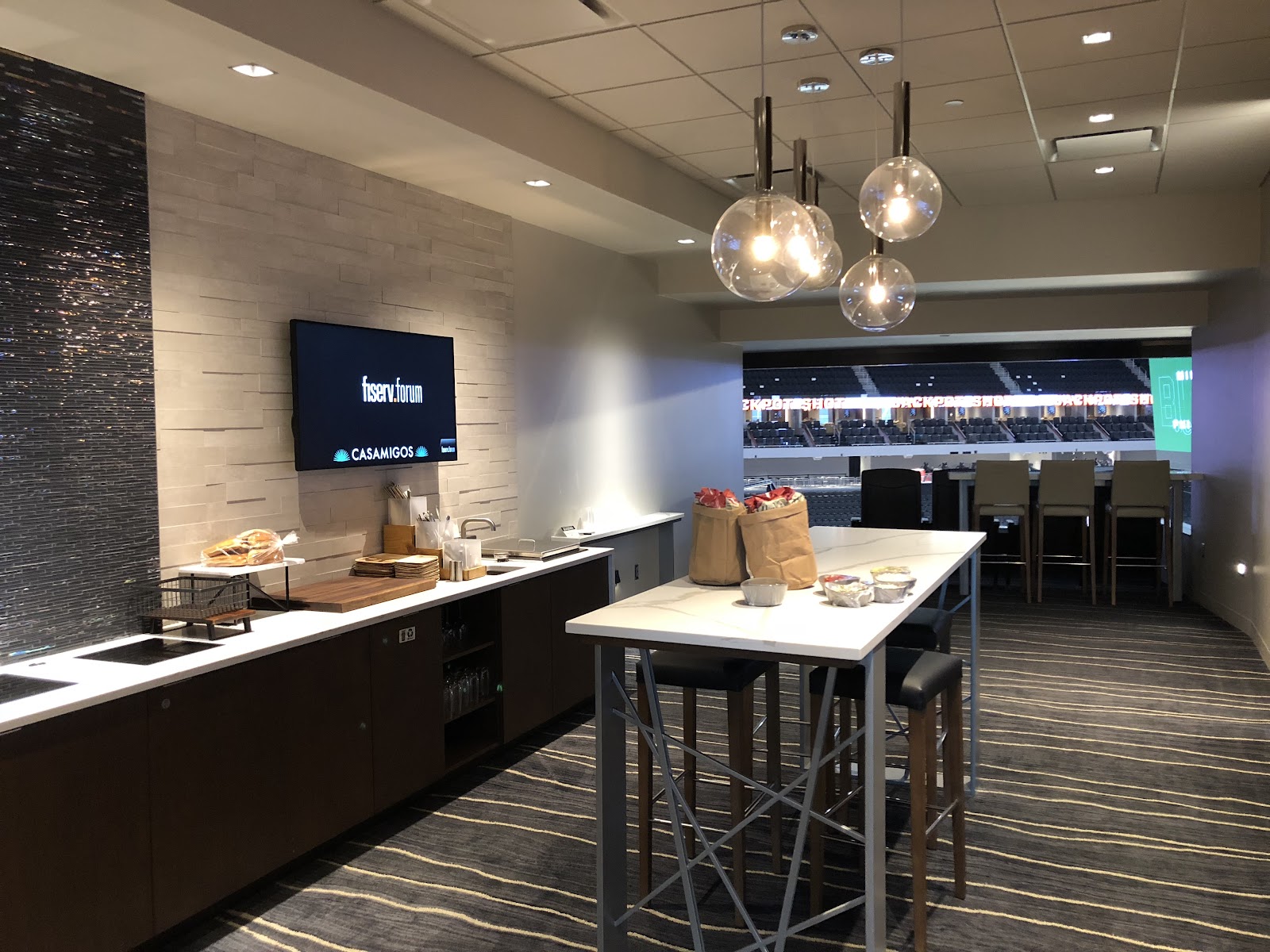 Much like Little Caesars Arena in Detroit, the walking space on the first-level concourse at fiserv.forum was especially spacious. The rustic, woodsy motif from the exterior of the arena, and parts of the second level, carried through. 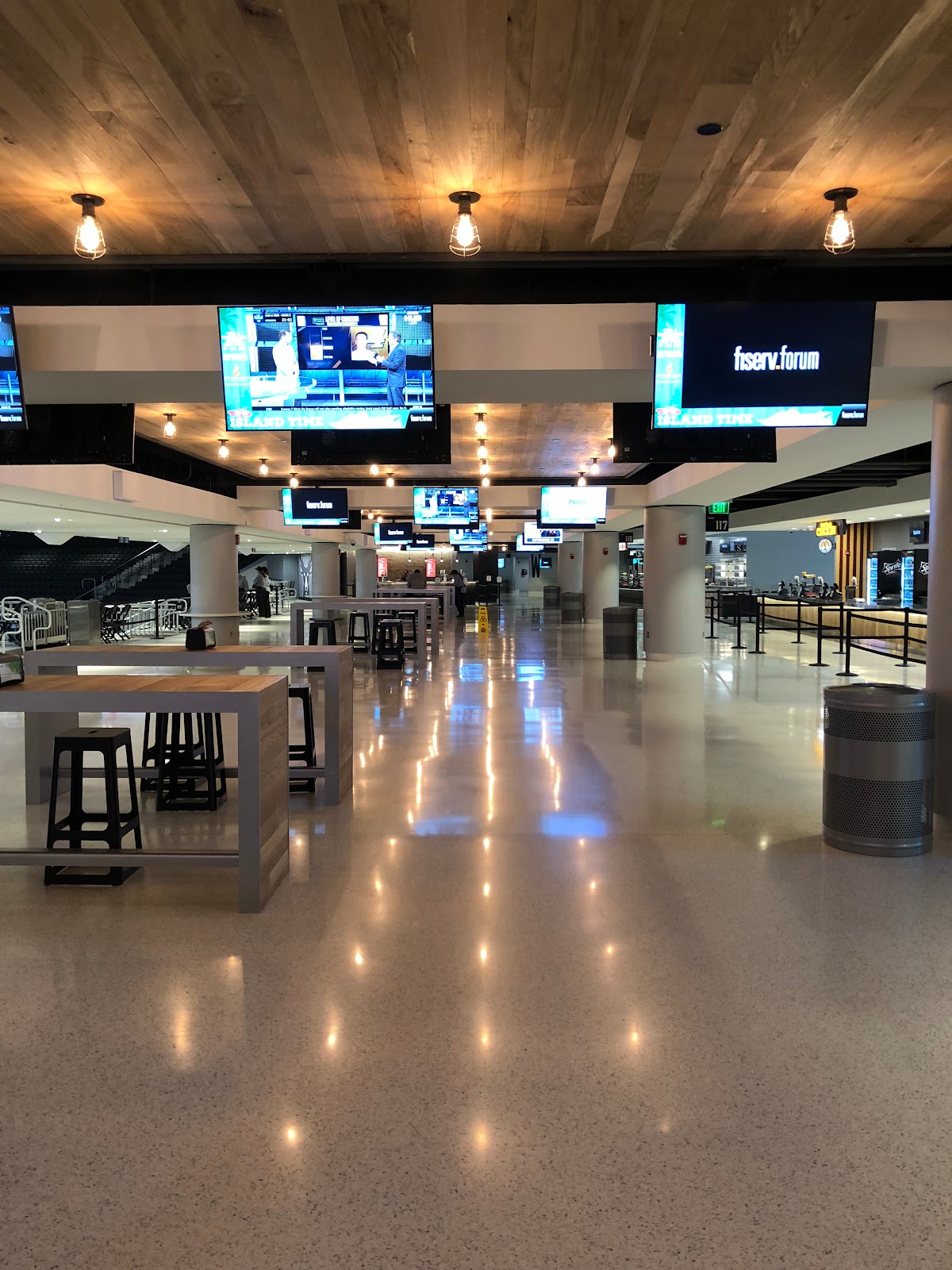 Once again, if you wanted to consume local products, especially of the drinking variety, you had ample chances to do so. 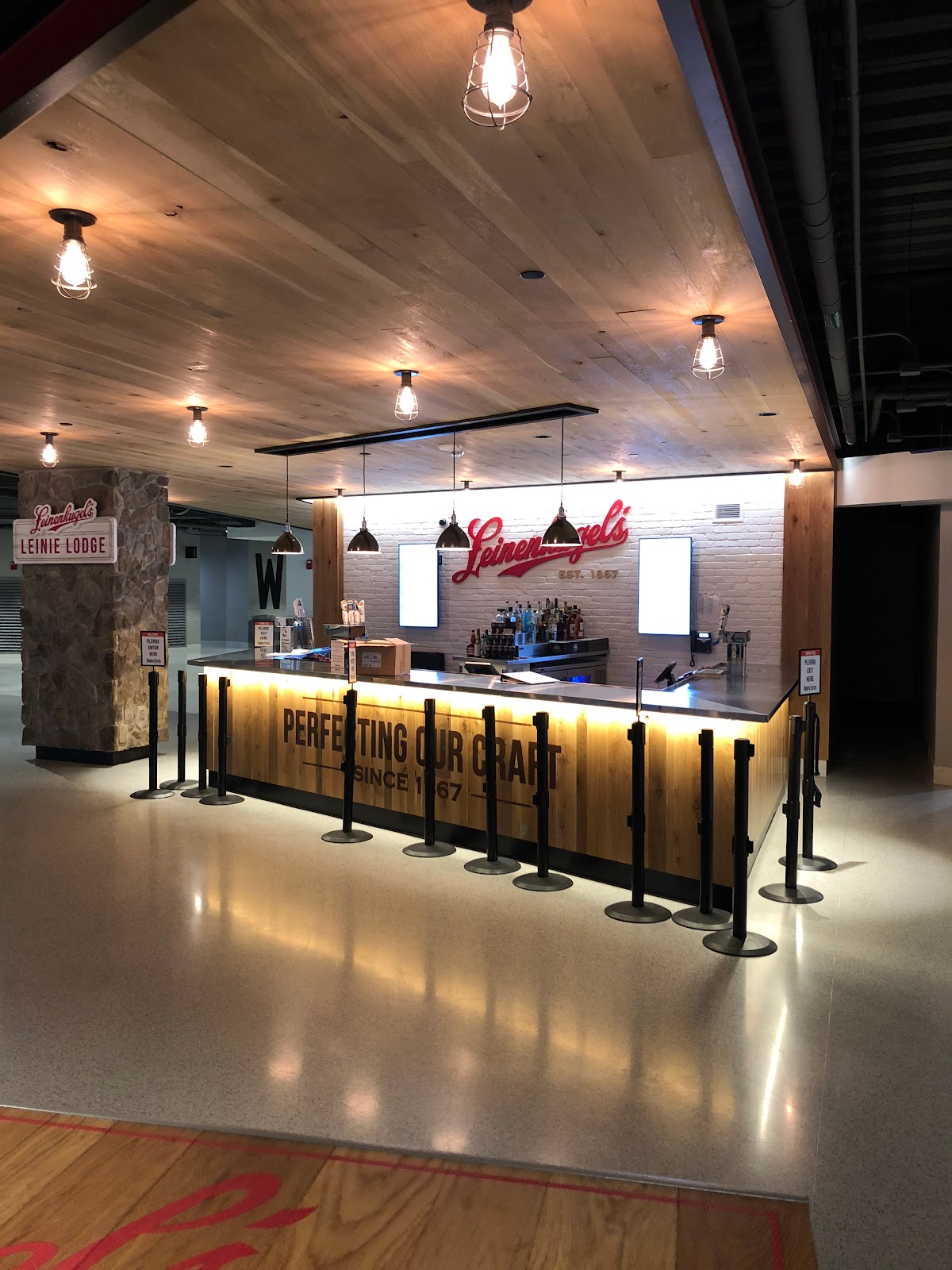 One of my biggest takeaways from fiserv.forum was that you could tell the building was built for basketball. For a multi-sport facility, Little Caesars Arena was still intimate for hoops, but the seating in fiserv.forum, especially in the 100 level, seemed perfectly pitched for fans to watch round ball action.

While this picture (taken from my press seat) might not do a good job showing it, at fiserv.forum, you felt on top of the action. 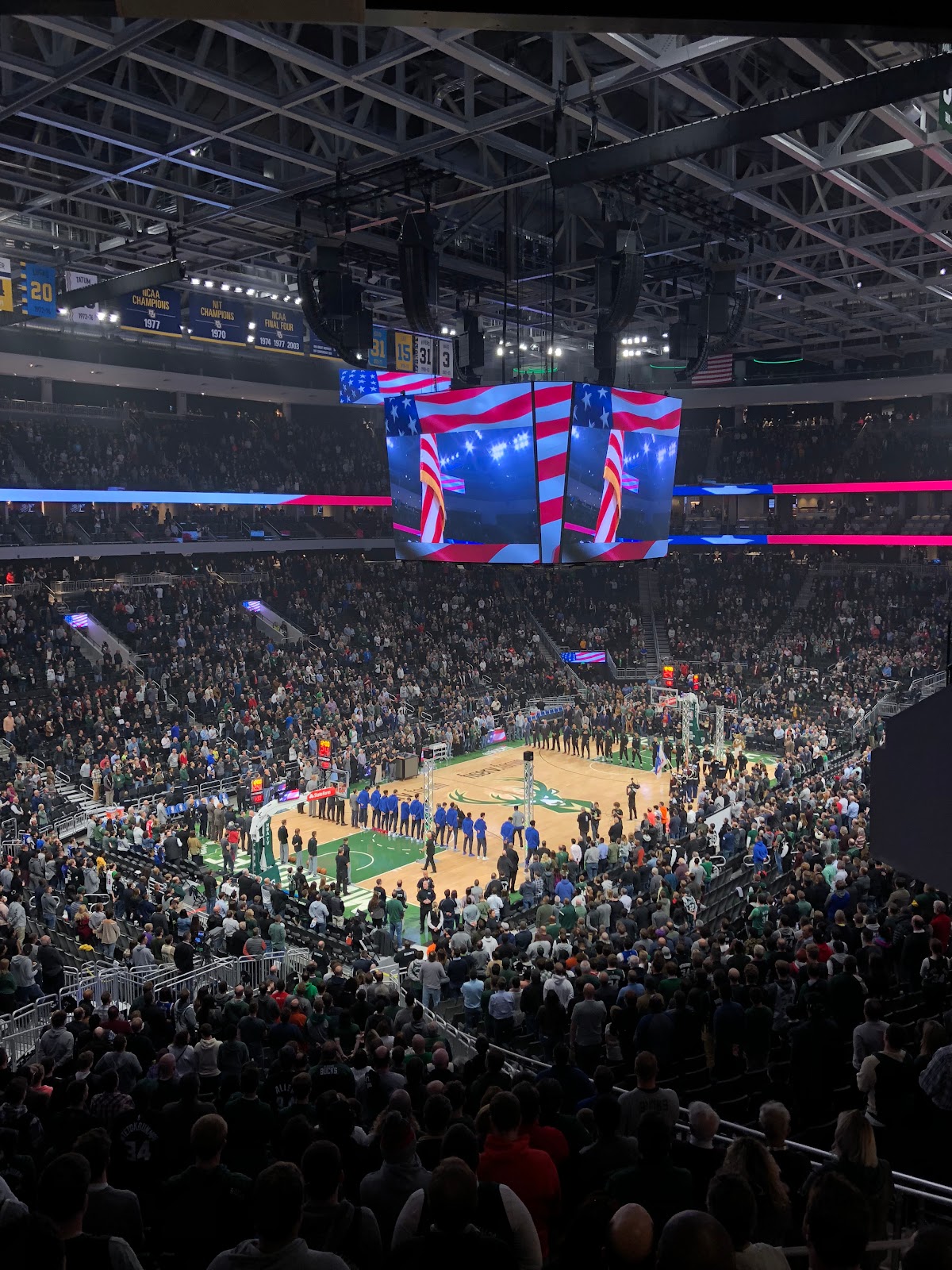 The scoreboard, as to be expected, was bright and sharp, with some nice bells and whistles underneath. I liked that its size, while big, wasn’t off scale for the size of the arena. 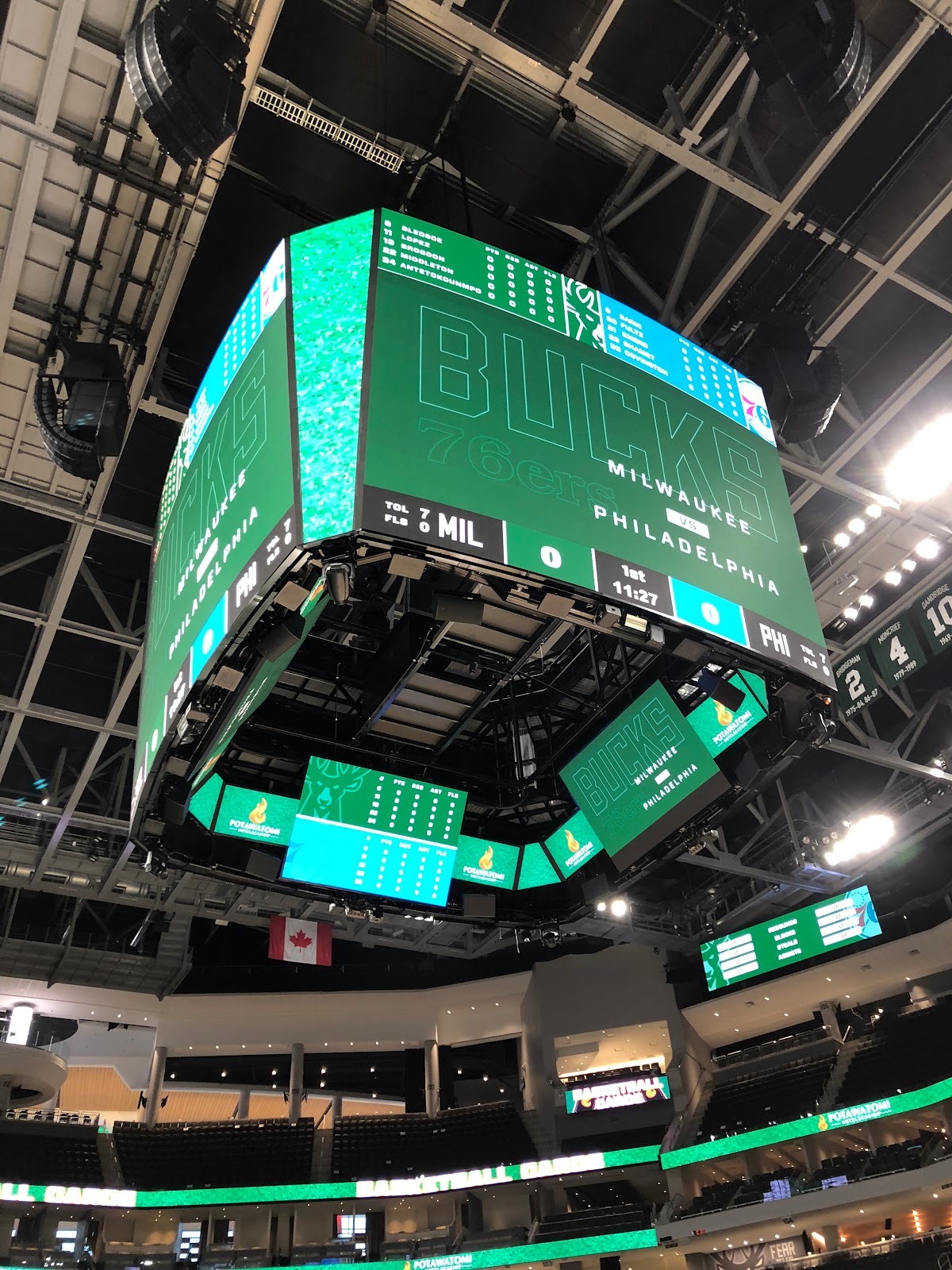 Next Time I Go…

I think I walked past what were a couple of meeting spaces and / or premium suites that were actually on the event floor level. The Sixers will be back at fiserv.forum for a Sunday, March 17th matinee, so I’m going to look into those more then. 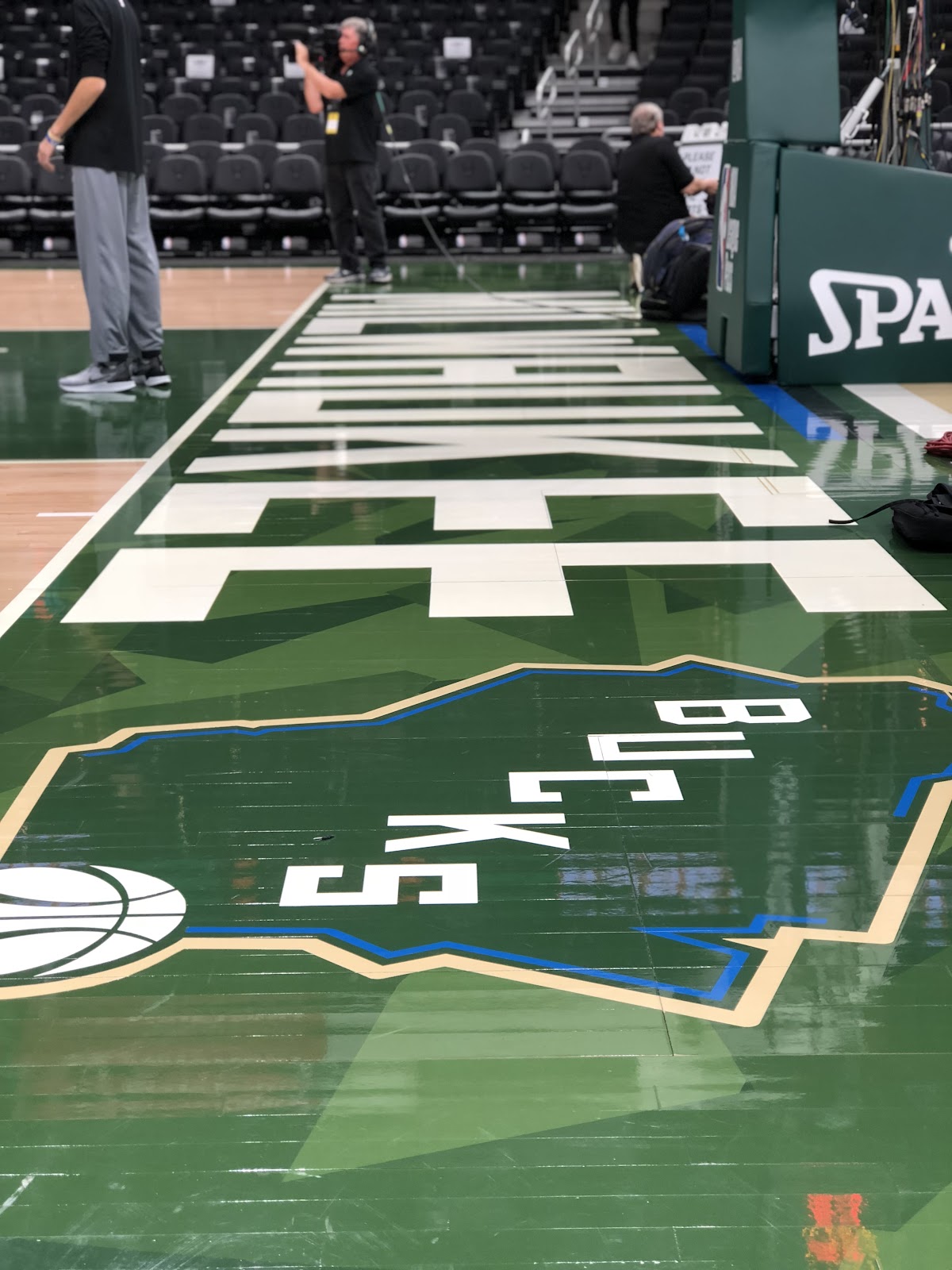 For teams and fans, Little Caesars Arena and fiserv.forum both offer top-of-class experiences. The two venues have each clearly been constructed and designed with lots of cutting edge features, t.l.c., and branding thought in mind.

Is it hard not to feel just the slightest pang of jealously over the Pistons’ and Bucks’ shiny new digs? Of course. That’s human nature.

But, I’m also excited for all the renovations that will be taking shape at The Center over the next couple years. The upgrades should only enhance a place where the 76ers have been enjoying increasing success.