Throughout his four-year NBA career, T.J. McConnell has always been among the first 76ers (16-8) to take the floor – home or away – for pre-game warm-ups.

This year, nothing’s changed. On the contrary, his work ethic has at times seemed even more fierce and determined, his on-court training starting even earlier, and ending later.

This correlation is no coincidence to Brett Brown, one of McConnell’s staunchest supporters since the Sixers signed the Arizona product as an undrafted free agent in the summer of 2015.

Thanks to his trademark, determined mindset, McConnell has subsequently been ready recently when called upon.

He was terrific in Friday’s one-sided 123-98 victory over the Washington Wizards, finishing with 15 points (his second-highest total of the season), two rebounds, two assists, and two steals.

The wins have been coming frequently lately – three in a row, and eight times in the Sixers’ last 10 games. The club will enter the finale of a three-game homestand Sunday tied with the Milwaukee Bucks for second-place in the Eastern Conference.

“It’s great,” McConnell said Friday of his impressions of this year’s team. “Since I’ve been here we’ve had great guys, and we again have great ys this year. It’s fun to play with them, and off the court they’re great as well. We just got a great locker room.”

Belying this enjoyment, though, is McConnell’s tenacious and meticulous approach to preparation. He makes it a point to constantly be in the gym.

“It just never ends,” said Brown of the pace of the long, 82-game NBA season. “You’re always doing something, or you should be doing something. Some people don’t. He does. And he goes harder. And he’s heard me say all the time, ‘This is life – it’s opportunity.’ You have zero idea when somebody wants you to play.” 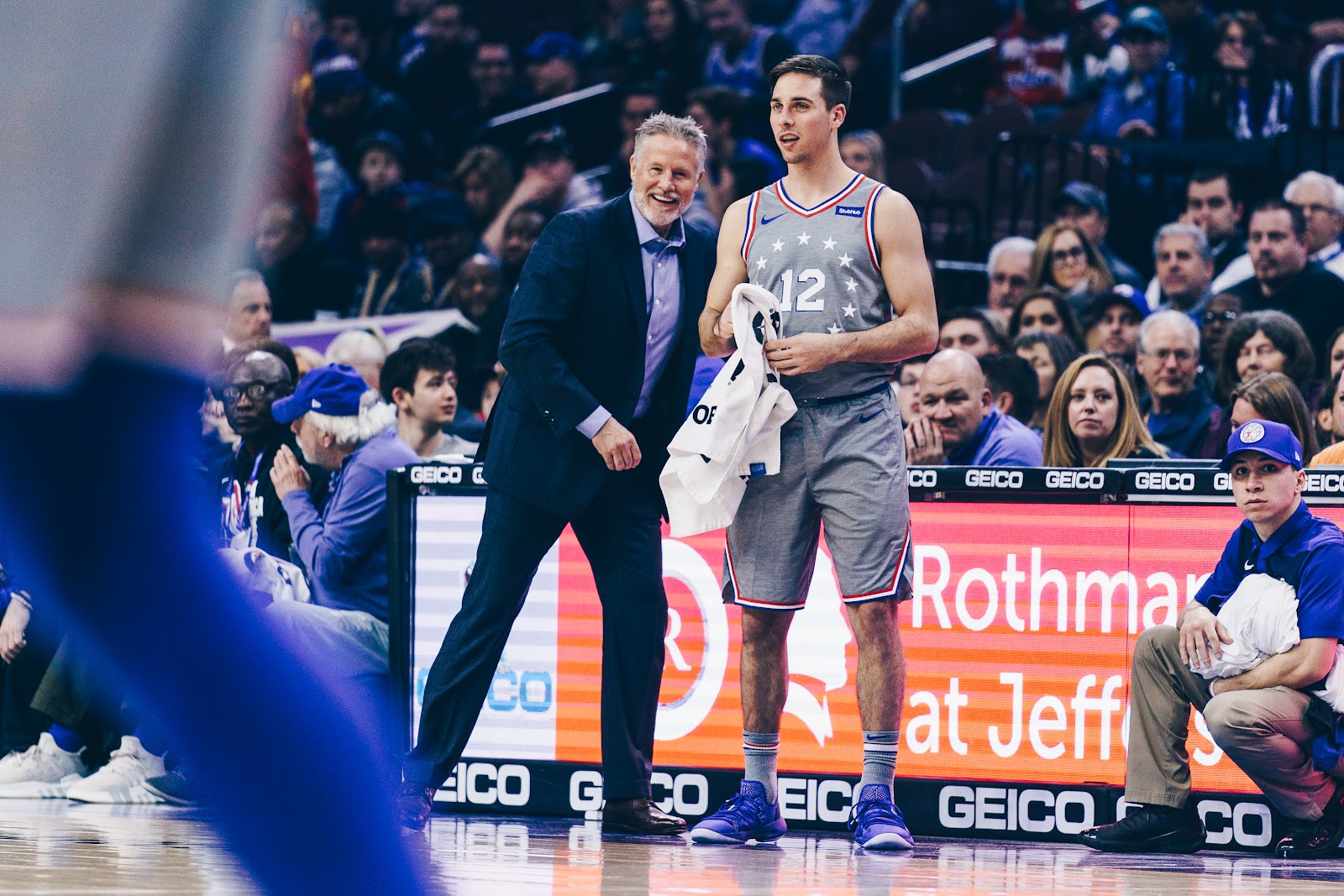 And here the Sixers are, on the cusp of heading into the heart of the 2018-19 schedule, with McConnell making valuable contributions.

Thinking back on nearly two decades of NBA coaching experience, Brown can recall a couple other good examples of players habitually keeping themselves fresh, and their teams reaping the benefit.

As an assistant for the San Antonio Spurs, Brown had a second-row seat for Steve Kerr’s ridiculous performance off the bench in Game 6 of the 2003 Western Conference Finals (see highlights below). The Jeremy Lin effect in New York during the 2011-12 season also came to Brown’s mind.

“TJ’s story is real,” Brown said. “None of us should expect it to be any different knowing who he is. Give him credit where he came in, and he’s capable of playing minutes because he’s maintained his fitness base.”

Sunday will bring the Sixers’ second and final go-round of the season with the Memphis Grizzlies (13-8). Memphis halted a season-high three-game losing streak Friday, with a double-overtime win at Brooklyn. Rookie big man Jaren Jackson (19 years, 76 days) made a bit of history in the marathon contest. With a career-high 36 points, he became the second-youngest player in league history to hit the 35-point mark. LeBron James remains the youngest.