This whole owning the opponent thing?

Up until the last two games, there wasn’t a lot that had come easy for the Sixers, despite the team getting off to one of the best starts in the NBA.

Following Wednesday’s 26-point rout of the New York Knicks, and another convincing victory for an encore Friday against the Washington Wizards (8-14), the Sixers are playing more and more like the well-rounded team they’ve been striving to become.

Sure, the Sixers’ 16th win of the season, earned by the lopsided score of 123-98 at The Center, wasn’t official until 48 minutes had tick tocked off the clock. But make no mistake – game was over long before that.

All in all, it was a solid, balanced performance, with eight players in double-figures.

“It’s good,” Joel Embiid said of the Sixers’ third win in a row. “We picked up our intensity defensively. I think we’ve been much better on that end, and offensively, we just keep moving the ball, and that’s working pretty well.”

Embiid was a significant part of the Sixers’ strong start, which was keyed by impressive two-way interior production.

By the end of the first quarter, the home squad had a 31-19 edge on the scoreboard, and already established a dominant 24-10 rebounding advantage (9-0 on the offensive glass). They had scored 14 points in the paint, too.

Embiid accounted for nine of those boards, and managed to register his NBA-leading 22nd double-double a mere three minutes into Friday’s second frame.

For the night, the Sixers needed only 22 minutes from Embiid, who finished with 16 points and 15 rebounds. None of his fellow starters logged more than 25 minutes, as Brett Brown removed the last of the first-stringers in the latter stages of the third quarter, with his group up 28

Thanks to their reserve corps contributing 65 points, the Sixers went on to lead by as many as 35 before Friday’s buzzer sounded. T.J. McConnell paced the second-stringers with 15 points.

Against Washington, Ben Simmons racked up his 15th double-double this fall, with 13 points (5-5 fg), 10 assists, to go along with eight rebounds. Jimmy Butler went for 11 points, seven rebounds, four assists, and four steals.

In all, the Sixers bested Washington 58-42 on the backboards, while cranking out 54 points in the paint.

Defensively, the Sixers limited the Wizards to 40.2 percent shooting, and an 8-28 showing from 3-point territory. All-Star guards John Wall (11 pts) and Bradley Beal (19 pts) combined for an inefficient 10 for 28 from the floor.

Brett Brown said, “We were able to rest guys, eight guys in double figures, defense was pretty good throughout the night. Did a pretty good job on the boards; the disparity, the difference is what wins games. Twenty-nine assists, that’s a good number, all those types of things.”

The Sixers’ consecutive 25-point victories marked the first for the club since March of 2008.

All on Your Head

Friday, the duo took the look to the court in a game setting.

The apparel choice was a topic of conversation after the Sixers’ latest win.

As for the origins?

“I’ve just been wearing it at practice,” Ben Simmons said. “Then, [Butler] said if I wear it, he’s going to wear, so we might as well just wear it tonight.”

Brett Brown approved of the fashion statement, but for deeper reasons.

“I love it,” said the Sixers’ sixth-year head coach. “They are defensive brothers, okay? You know they’re blood brothers – the band signifies to me their bonding, a defensive bonding. I’ve asked Jimmy to put Ben under his wing, and really help Ben be all he can be defensively.

“So that’s what it is, a bonding of defensive brothers.”

About a minute and a half into Friday’s fourth quarter, and the Sixers in front by 25 points, Brett Brown felt it was time to do something he hadn’t done yet this year.

Bring Shake Milton into a game.

Upon checking into his first regular season contest, the SMU product wasted little time getting involved, hitting a 3-pointer on his first possession (and first touch). He ended the evening with five points and two assists.

“It felt good just to get out there, get a sweat, put in a bunch of work,” Milton said. “Just to get to where I am now, it’s motivating, and it’s going to keep me going.”

The 54th overall pick in this year’s draft, Milton, along with Demetrius Jackson, is one of the Sixers’ two two-way contract players.

Milton said playing in the G League made him feel prepared for Friday, his NBA debut.

“Philly has amazing fans,” he said. “As long as you’re out there playing hard, they’re going to support you 100 percent.”

Between the first and second quarters of Friday’s game, the Sixers made a noteworthy recognition on big scoreboard at The Center. 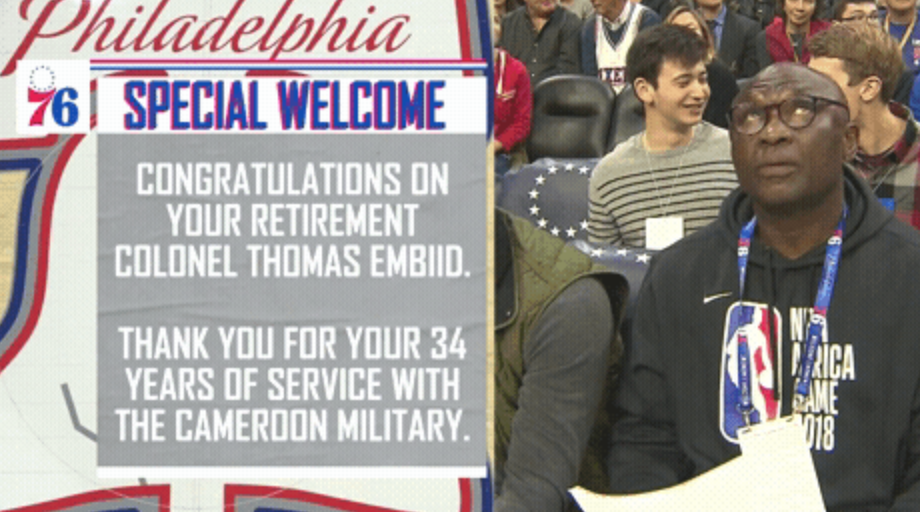 Seeing your kid put his generational talents on display from a courtside seat the day you retire is certainly a good way to usher in a new phase of life. Thomas Embiid also celebrated  his birthday the previous day.

His oldest son heard the cheers when the above message was shown to the crowd.

“It’s great,” said Joel Embiid. “Like I say, Philly fans, they’re so passionate and they show a lot of love. You know every time they show my dad’s at the game they always show him a lot of love, so I really appreciated that.”

The Sixers will put a wrap on their second three-game homestand in two weeks this Sunday against the Memphis Grizzlies. The match up will be the last of the season between the two teams. Back on November 10th at FedEx Forum, Memphis held off the Sixers, 112-106. With the Jimmy Butler trade being finalized at the time, the Sixers only had nine players available in the game.