The cover of Meek Mill’s new album “Championships” serves dual purposes—at once a shrine to the city of Philadelphia and the triumphant life he’s lead since being escorted from prison by helicopter in April.

While the confetti provides a clear nod to the Eagles franchise that supported him, the words Meek weaves together shade away from the field, landing closer to Colin Kaepernick’s stance than any current player. With lines like, “They told Kaep stand up if you wanna play for a team/And all his teammates ain’t saying a thing,” Meek makes it clear where he lands on kneeling and several other hot-button sports topics.

He didn’t change his tone in a conversation with The Crossover that hit on the Sixers, James Harden and Puma sneaker, but also touched police reform, the prison pipeline and much more. 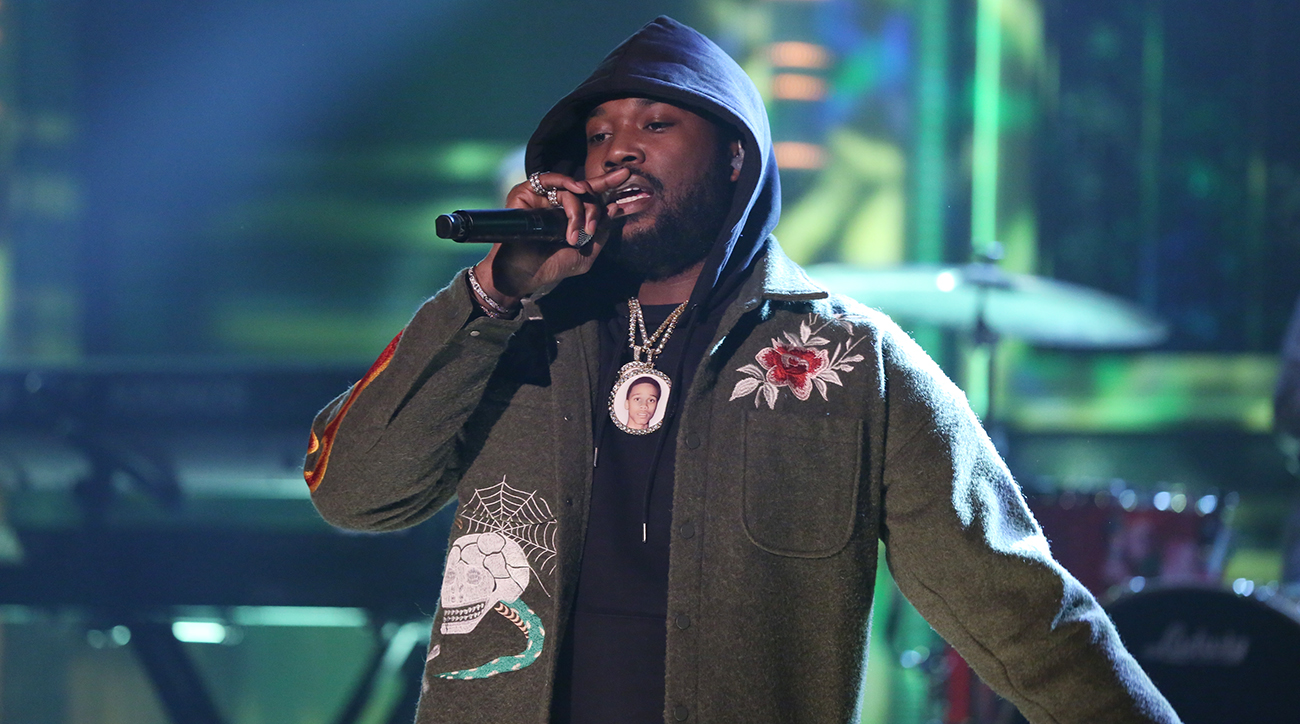 DeAntae Prince: We can start with the new album, which was released on Nov. 30. I see the name Championships and green confetti raining down. Is that a nod to the Eagles and their support of you?

Meek Mill: The Eagles definitely inspired it. They inspired the whole championship theme of overcoming everything and being an underdog. The color was kind of a coincidence. I just wanted to have a picture of confetti falling during a celebration with me still having a focused face on, still looking forward.

DP: Sticking with the Philly theme, Michael Rubin and the 76ers have obviously been in your corner this entire time. How much time have you gotten to spend with him and Ben Simmons and Joel Embiid during the season?

MM: It’s always been great, they’re all my friends and we communicate on a daily basis. It always good to feel that energy, we have a lot going on this year with the Sixers. Joel, Ben and we got Jimmy Butler now.

DP: So how do you feel about the team now that Jimmy is in the fold? Do you think they have a better chance and could maybe come away with a championship of their own?

MM: Yeah, Jimmy Butler is a beast. I remember two or three years ago we played them and I was talking trash to him. He had a 50-point game against us, so we wouldn’t mind having a guy like that on our team.

BASKIN: Behind the Scenes of Meek Mill’s Release

DP: Another NBA player who was in your corner was James Harden. He’s one of the most fashionable guys in the NBA. Do you all compete in that area? Maybe discuss whose sneaker is better now that you’re with PUMA?

MM: We always talk about who has the best drip. James Harden thinks he’s one of the flyest dudes in the NBA. Sometimes he be missing his foul shots when it comes to dressing. He throws it on. He gets his good days.

DP: I’ve seen a lot of NBA players hooping in PUMA’s this season, with all of the rookies attached to the brand. Is it cool to see guys like Deandre Ayton and Terry Rozier playing well under the PUMA umbrella?

MM: Everybody under the PUMA branch we’re like connected as family so it’s good to see them playing in the sneaks and actually doing well in them. We’re all representing the same thing so it’s great.

DP: A lot of sneakers people hoop in stay there and can’t be worn off the court. That appears to be one of the great things about the PUMA Clyde Court ‘Purple Glow’ and others. Do you think that’ll pull more people into the PUMA brand?

I think it’s a great shoe. I always liked the look, but when I put them on and felt the comfort and the structure it made me appreciate them even more. I’ve been playing my little basketball lately so I think it’ll be a great shoe for PUMA. This is the first release of a basketball sneaker for PUMA actually, so I think it’s going to be great. 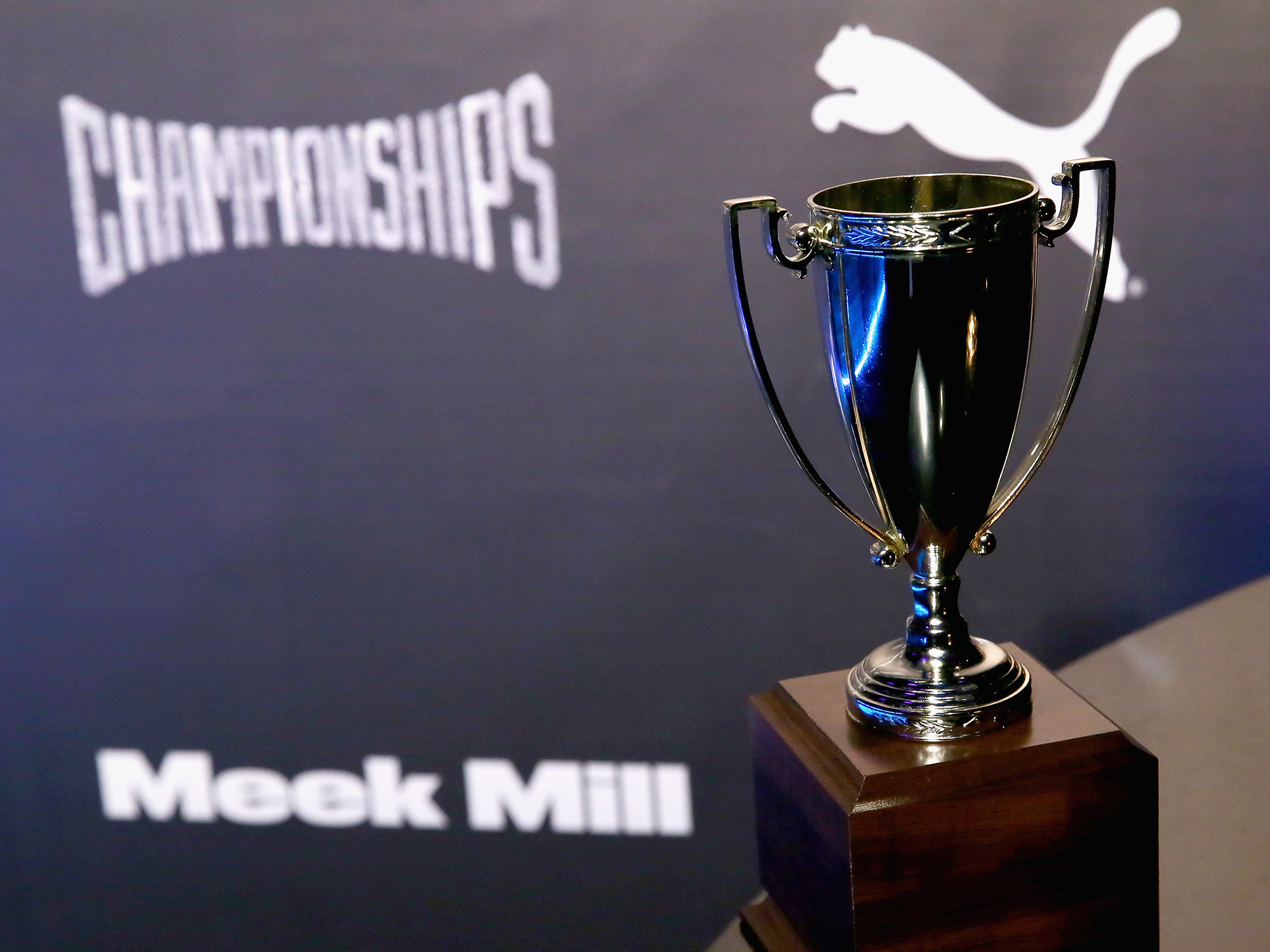 DP: I listened to the album and heard the Drake song, saw that you all played ping pong for $100,000. The 76ers-Raptors game is coming up soon. Is there a little wager on that game or who can come out of the East?

MM: I don’t know if we’re going to bet on that game but if we’re around each other, and if that’s how he feels—if he wants some smoke with the Sixers we can arrange that.

DP: One thing I really appreciated about the album was the late ‘90s and early 2000s feel, with the Reasonable Doubt sample and a few other songs. How cool was it for you to be able to rhyme over some of the beats you grew up on?

MM: That was great. It was great having Jay-Z even clear that sample because that’s a precious record and to be able to work with Jay is definitely a cool feeling, and that’s what I work for. Besides taking care of my family, the best thing about rapping is working with people you always looked up to in the game. It’s a great feeling.

DP: There’s also the message you’re sending to a lot of younger people. Do you get that energy back? Do they tell you they’re learning from your songs and the moves you’re making?

MM: I definitely get that, definitely with this album right now. There’s a lot of people saying that the music that I’m giving out right now has a lot of information and content.

CROSSOVER TV: Meek Mill Is Free and Hoping to Make a Difference

DDP: How did the criminal justice goal to liberate 1 million people from the system come about? And how much does it help to have that strong foundation like Rubin, Jay-Z and Robert Kraft behind this mission?

MM: Jay-Z already knew about this, but there were a few of them who were introduced to how the system worked and they wanted to do something about it. They wanted to really come up with money and bring in effective people who could really make things happen and try to help free some of these people from prison who don’t deserve to be there.

DP: I watched the New York Times editorial and it was really strong. One part that stood out to me was the line about the prison system being the new plantation. Can you expand on that?

MM: They’re actually making money off prisons, they have inmates working for eight to 24 cents an hour. You have people who are in prison who haven’t even committed real crime or might be there for a simple probation violation and chained from wrist to ankle, and it kind of reminded me of slavery.

Not everyone in prison is in there for violent offenses. Some people end up there for getting too many traffic tickets. You still will be chained up, you will be placed in a cell the size of a small bathroom, you will be fed food that we wouldn’t give to our pets. Sounds like slavery to me.