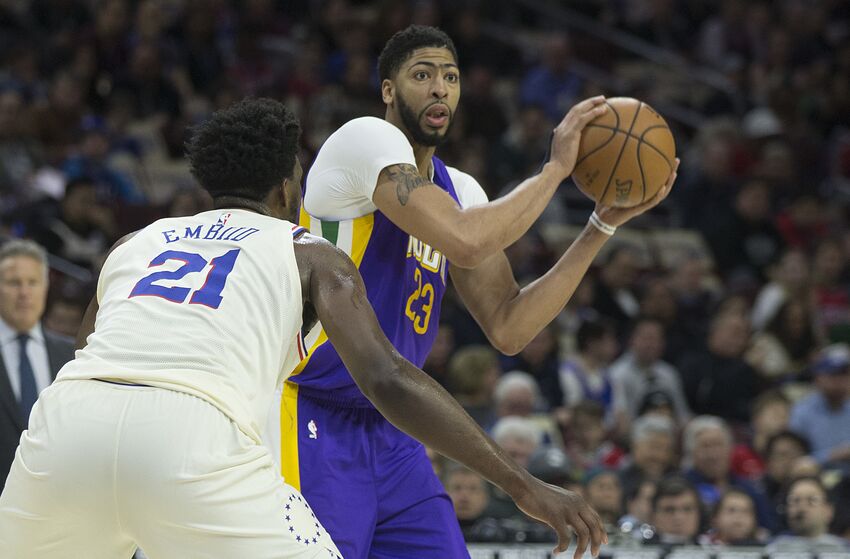 PHILADELPHIA, PA – FEBRUARY 9: Anthony Davis #23 of the New Orleans Pelicans looks to pass the ball against Joel Embiid #21 of the Philadelphia 76ers in the third quarter at the Wells Fargo Center on February 9, 2018 in Philadelphia, Pennsylvania. The 76ers defeated the Pelicans 100-82. NOTE TO USER: User expressly acknowledges and agrees that, by downloading and or using this photograph, User is consenting to the terms and conditions of the Getty Images License Agreement. (Photo by Mitchell Leff/Getty Images)

The Philadelphia 76ers might have found themselves in prime position to land a superstar big man player if things go sour in New Orleans.

In the past, I wrote about how the Philadelphia 76ers should keep an eye on New Orleans Pelicans franchise big man Anthony Davis when the news broke that he left his agent. Davis did go on to sign with Klutch Sports, who coincidentally also represents the Los Angele Lakers star LeBron James.

According to Chris Sheridan of Get More Sports, Davis has a short list of teams that he would consider playing for.

“A source with intimate knowledge of the inner workings of the NBA told Get More Sports that Davis is considering five teams in the near and distant future: The Boston Celtics, Los Angeles Lakers, New Orleans Pelicans, New York Knicks and Philadelphia 76ers.”

Sheridan did note that the Pelicans may not stay on the list depending on where the team lands in the Western Conference playoff hunt. It should be noted that Sheridan did have the Boston Celtics and the Lakers as the front runners for Davis, but did state that the Sixers do have a realistic shot at the big man. Sheridan cited that BetDSI and stated that the 76ers had 8-1 odds of landing the All-Star big man.

It’s important to include that Davis is signed to a contract through the 2020-21 season, though the last year of that deal is a player option. There is a chance he decided to not exercise that option and become a free agent in the summer of 2020. However, several of the Sixers young players would be up for extensions in the next couple of seasons, so trading for Davis this season would be a lot easier to execute.

In the previously mentioned article I wrote about Davis, I constructed a hypothetical trade that could land Davis in the City of Brotherly Love. The deal included the Sixers getting Davis and Darius Miller, in exchange for Dario Saric, Zhaire Smith, Wilson Chandler, Jerryd Bayless and two future first round draft picks. If push came to shove, the Sixers could include one or two of the plethora of future second round picks the club owns.

In that same article, I went in depth about the pros of adding Davis to the Sixers, especially on defense. New general manager (GM) Elton Brand should be making phone calls to Pelicans GM Dell Demps to see the price for the team’s franchise cornerstone.

Brand’s first job as the Philadelphia 76ers GM is to make sure the franchise is operating smoothly, however he should also keep a close eye on the West’s playoff race as the season progresses. If it appears the Pelicans falter down the rankings out in the West, then Brand needs to be ready with a very big trade package for the big man.