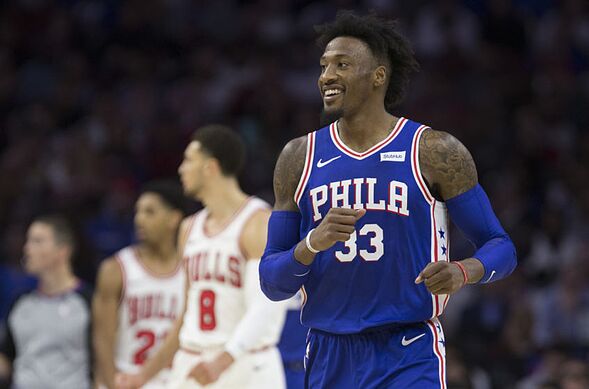 Robert Covington may not be the best player on the Philadelphia 76ers, but he has offered the team a huge return on investment.

The entire narrative of “The Process” that the Philadelphia 76ers have endured is far too extensive to tell in one story, but the small chapters and sub-topics of the several last few seasons of team history are interesting, to say the least.

Perhaps one of the most interesting parts of The Process is Robert Covington, who is also one of the only pieces from the rebuild that has been around since virtually the very beginning.

Covington was teammates with Furkan Aldemir (not Furkan Korkmaz, Aldemir), JaKarr Sampson, Hollis Thompson, and Tony Wroten. Just listing those names as members of the team should give Sixers fans some relief that they’ve come this far since 2014 (a short four years, folks).

Covington, somehow, has outlasted a lot of members of the Sixers who were at some points considered to be staples of the future. Nerlens Noel, Jahlil Okafor, Jerami Grant, Nik Stauskas, and more have all come and gone as pieces that looked like they would be key cogs to the rotation, only to get shipped out for various reasons, mainly dealing with fit and/or not fitting well with the current win-now mentality of the team that has been recently adopted.

Covington, in short, has stuck around because he has been the single-greatest investment that has been made throughout the entire rebuild.

I’m not saying Covington is better or more valuable than players like Ben Simmons and Joel Embiid, rather I am saying that the return on the cost to get him has, at this point, far outweighed what was initially invested and what he has received in contract extensions later on.

Like any premier investment in the real world, the key is to buy low and sell high. Ideally, that return comes quickly, but often the best investments take time.

Covington’s return so far has been on a relatively quick pace, even for an NBA player. In the NBA, the “sell” part doesn’t always come for each player, but along the way, the players can certainly pay dividends like any stock in the real world.

Let’s start with that initial investment.