Sixers History | Uniform Retrospective – Back to the Basics

Eight times this season, the 76ers will don their City Edition jerseys inspired by the classic film Rocky. The uniforms are highly distinctive and stand out in Sixers history as the first to have gray as its dominant color.

Of course, every jersey in franchise history has some distinction about it. Otherwise, why change up the threads?

For a franchise that’s been around for over seven decades, you can believe the 76ers have indeed had a lot of different threads.

With that wealth of history in mind, every night this season that the Sixers rock the City Edition Rocky uniforms, we’ll take a quick look back at a previous 76ers jersey.

For previous installments of the series, click the links below:

Back to the Basics, with Burton and Barros

After spending over a decade in their classic red uniforms, the 76ers gave the world a gaudy delight with their early 1990s jerseys. Those highly animated star uniforms left a stylistic impact on the wider NBA, but were ditched in 1993, after just three seasons.

For the 1994-95 campaign, the Sixers decided to go retro with an outfit that gave some minor updates to their classic 1980s jersey. Gone were the stars from the torso and trunks, while SIXERS was again simply stamped across the chest. Some minor flair was introduced with SIXERS in block lettering and some blue trimming on the jersey sides. The home color remained white, and road red was still in effect. 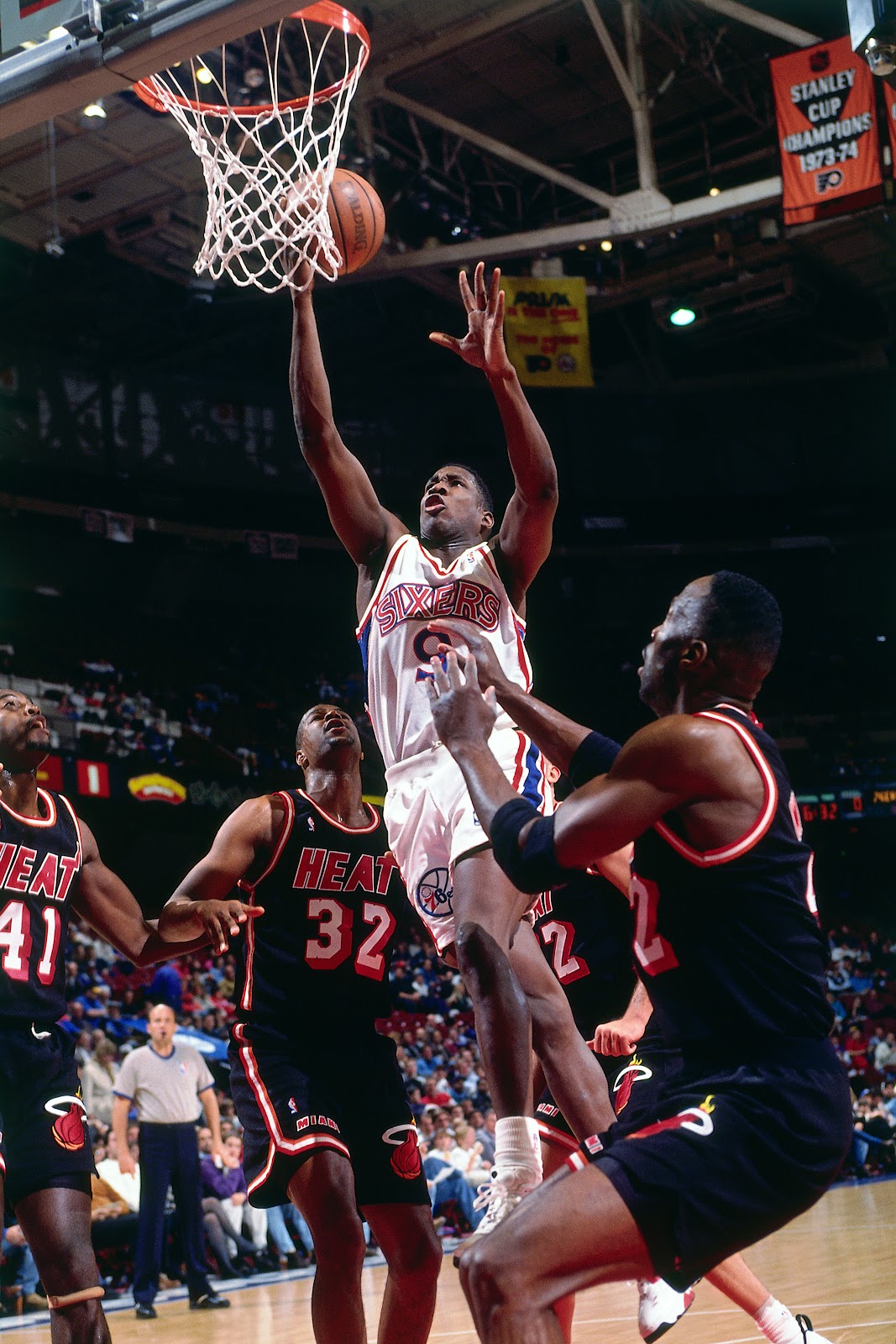 To show our appreciation for these overlooked retro delights, let’s take a look back at Dana Barros and Willie Burton. Barros and Burton both had career seasons in 1995, giving the back-to-basic jerseys a nice introduction to the world.

Of the two players, Burton’s peak season was more unexpected. Drafted ninth overall in 1990 by the Miami Heat, Burton had unfortunately seen diminishing returns in his NBA career. His scoring average steadily declined from 12.0 to 11.2 to 7.8 to 7.0 over his first four seasons. On November 3, 1994, the day before the season opened, Burton was waived by the Heat.

Luckily for Burton, the Sixers were in need of help on the wing, and the team signed the small forward days later on November 8. Over the next month, Burton proved a solid waiver wire pick up, averaging 15.8 points and even entering the starting lineup. However, no one could have expected the rapturous game he unveiled on December 13, 1994. Poetic justice ensured that Burton’s game of a lifetime occurred against the same Miami Heat club that cut him just over a month earlier.

Burton scored a scorching 53 points in the Sixers’ 105-90 win. His shooting numbers were simply outstanding: 12 for 19 on field goals, and 5 for 8 from downtown. Where Burton really carved up the Heat, though, was at the free throw line making 24 of his 28 attempts.

The 53 points by Burton were the most by a 76er since Wilt Chamberlain’s March 18th, 1968 53-point effort. Burton’s free throws made and attempted both remain franchise records.

Burton was effusive of his teammates after the game, and admitted he was a little delighted that Miami was the opponent who caught his 53-point fury:

“It was an added joy to get the record against Miami. I never dreamed I could do something like this, but I owe it to hard work and dedication. I only wanted an opportunity, and I got in Philadelphia.”

Burton added, “I’ll have a hard time sleeping. I just want to savor this.” 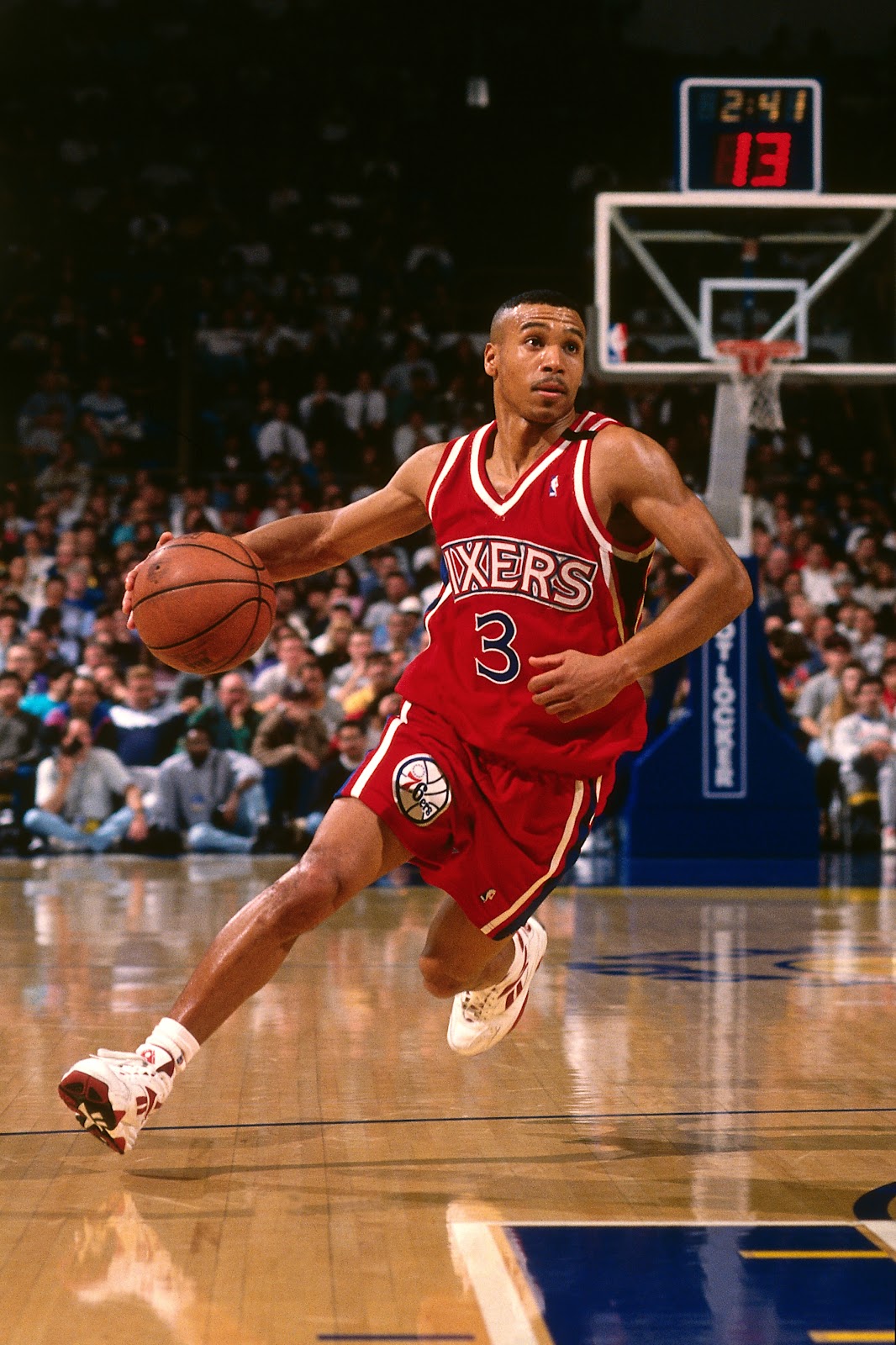 Like Burton, Dana Barros was a first-round draft choice who had struggled to gain traction in the NBA. During his first four seasons, Barros had a backup guard role in Seattle. Although finding minutes was hard, he had no trouble finding the bottom of the net, leading the NBA in 3-point percentage (.446) in 1992.

Barros found his way to Philadelphia via trade in the fall of 1993, and enjoyed a modest breakout campaign that year, averaging 13.3 PPG and 5.2 APG. Well, that proved just an appetizer for his 1994-95 season.

The 5-foot-11 point guard was selected to his first and only All-Star Game and was named the NBA’s Most Improved Player. And like his teammate Willie Burton, Barros dropped a 50-piece during the season.

During that March 14th, 1995 match versus Houston, Barros pretty much couldn’t miss. He scored exactly 50 points, making 21 of 26 field goal attempts, and connecting on 6 of 8 3-pointers. And, he made both of his free throws.

But the effort was for naught as the Rockets – on their way to another NBA title – beat the Sixers, 136-107. The loss left the Sixers with a 17-45 record on the season.

Despite the loss, Barros was understandably excited about his personal performance.

“Of course I would have liked to do it on a different night,” he said. “But this is one of those once-in-a-lifetime things for me. If you get a chance to score 50, you have to do it.”

But a 29-point blowout is a tough loss. Barros understandably knew that too, no matter the silver lining.

“They jumped on us early and we couldn’t get back into it,” he concluded after the game. “It was an uphill fight for us, just like it’s been all season.” 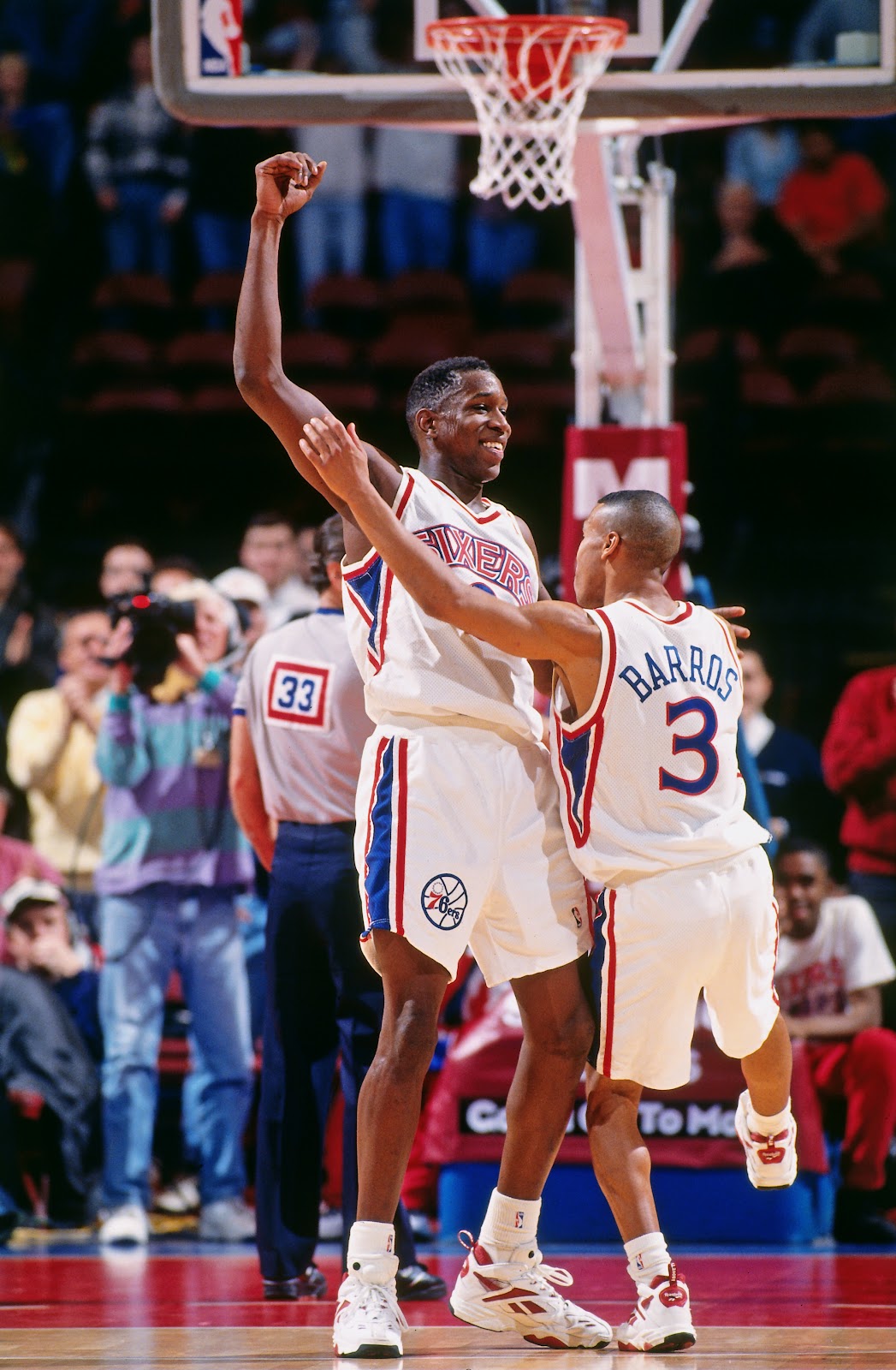 The Sixers finished the season 24-58, and endured several more losing seasons before finally returning to a .500 record and the playoffs in 1999. By that point, the back-to-the-basics jerseys were abandoned for the black-and-white jerseys that signified the Allen Iverson era.

As for Burton and Barros, their time in Philly ended quickly after their magical 1994-95 season.

Burton signed a contract to play in Italy for the 1995-96 season after Philadelphia drafted Jerry Stackhouse, and signed swingmen Vernon Maxwell and Richard Dumas.

Barros, meanwhile, signed as a free agent with his hometown Boston Celtics in the fall of 1995.

There weren’t a lot of wins in this era, and some of the players didn’t stick around too long, besides the venerable Clarence Weatherspoon. Oddly enough, though, the fleeting nature of the era makes Burton’s record-setting game and Barros’ All-Star campaign all the more memorable. Their Spectrum spectaculars gave Philadelphia fans something good to remember.