The word “dominant” gets thrown around a lot with Joel Embiid because…well, it feels like the All-Star throws around dominant performances just about as regularly as he throws down dunks.

But even by the 7-footer’s own, elite, all-league standards, Wednesday’s game was something else.

And it wasn’t just the numbers he put up.

Embiid, after all, has enjoyed plenty of high-volume nights during the first half of the season, in both the points and rebound columns.

No, in the 76ers’ (25-14) 132-127 win over the Phoenix Suns (9-30), it was more about the way the All-Star went about his business, namely in the first half. He was an interior scoring terror, an overpowering force for which Phoenix’s resistance was feeble, at best. 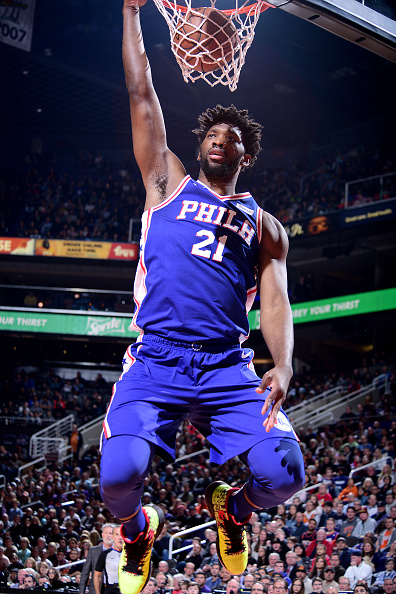 We strive to avoid hyperboles and heavy-handed writing here, but Embiid was really that much of a problem.

And neither did former Sixer Richaun Holmes.

By the time intermission rolled around, Embiid boasted a staggering box line:

Yes, Embiid cooled in the second half – he almost had to, didn’t he? But the damage had been done.

While Phoenix made things uncomfortable behind a resurgent fourth quarter push, Embiid was there to help steady the ship. His wing jumper with five minutes to go moved the margin back to double-figures after the Suns, once down 30, had clawed back to within single-digits.

Then, with two and a half minutes left, Embiid flushed a dunk to re-establish an 11-point advantage. Phoenix would get as close as three points, with 4.6 seconds remaining, but that was it.

All said and done, Embiid was responsible for a season-high tying 42 points, 18 rebounds, three steals, and two blocks. 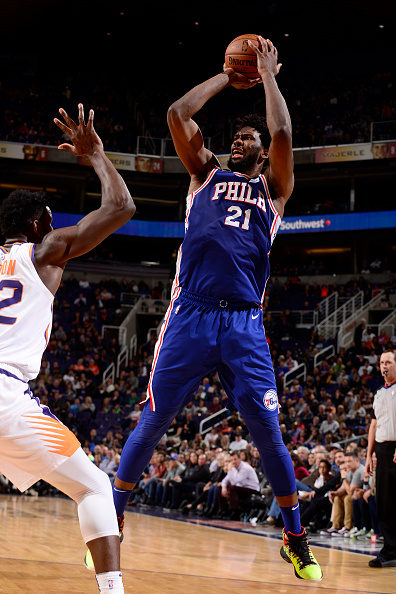 Also noteworthy from Wednesday’s victory was that the Sixers, playing for the second time in as many days, were without two starters, Jimmy Butler and Wilson Chandler. Each was sidelined with an upper respiratory infection.

“To get a win on the road and go back to Philadelphia is the bottom line,” said Brown.

The Sixers went 3-2 on their season-long road trip, which started Christmas Day.

SIMMONS STEADY FROM THE STRIPE

From start to finish, Ben Simmons proved to be a tough cover for Phoenix. He subsequently got to the foul line early and often in what was ultimately one of the strongest free throw shooting efforts of his young career.

The second-year Aussie matched a personal high by making 15 shots from the stripe on 23 attempts. 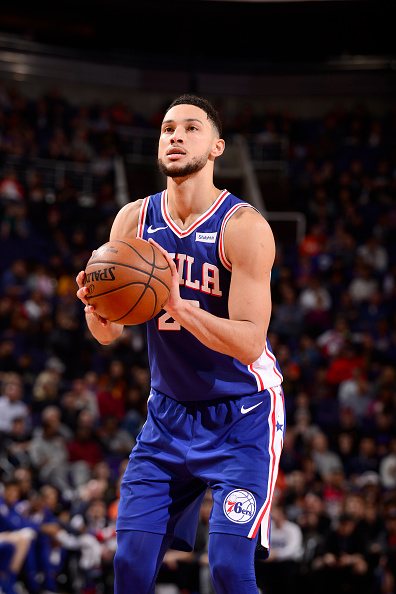 In our view, there was certainly something to be said for Simmons converting 65 percent of his opportunities against the Suns. He’s a lifetime 57 percent shooter from the line.

Heading into the 2018-19 campaign, improved and more frequent foul shooting were two of the main areas Brett Brown and the Sixers wanted Simmons address in respect to his development.

THERE WAS THE BIG THREE…
…and the “other two,” as we’ll refer to them.

The weight of Joel Embiid’s, JJ Redick’s, and Ben Simmons’ collective contributions in Wednesday’s win couldn’t be overstated enough. The trio teamed up for 98 points, and went a combined 40 for 52 from the free throw line.

But then, there were key moments involving other members of the rotation, too.

Logging his third start of the season, Furkan Korkmaz (10 pts, 4 reb, 3 ast) was central to a huge sequence. After Phoenix had whittled the gap to six points with three and a half minutes left in the fourth quarter, he nailed a 3-pointer to get the Sixers some breathing room back.

The club’s next trip down the floor, Korkmaz fed Embiid for a pivotal dunk that made it 119-110.

“Furkan came in and played well,” said Brett Brown. “You completely felt momentum turning, and Furkan hit a monster three. We really were in a position where we needed a basket. I thought Furkan, in general, played well.”

He sunk a pair of threes (he entered the evening with only three 3-pointers total for his NBA career), and rose up for an impressive alley-oop jam.

“We were down bodies, back-to-back,” Brown said. “I thought he was outstanding.”

A little jam with that Turkish slice, please

After a two-day reprieve in the schedule, the Sixers will make an anticipated return to The Center on Saturday when they host Luka Doncic and the Dallas Mavericks. The Slovenian rookie sensation and decorated former European star has been spectacular in debut campaign, averaging 19.6 points, 6.5 rebounds, and 5.0 assists per game.