Being in the 90th percentile for anything usually means you’re doing pretty well.

That was certainly the case last year for the 76ers, which finished third out of the NBA’s 30 teams with a regular season defensive rating of 102.0 points allowed per 100 possessions.

The figure was just 0.5 points shy of the league’s lowest mark, posted by none other than the Sixers’ eventual playoff ouster, the Boston Celtics.

And it was, in large part, precisely because of how that second-round series against the C’s unfolded that the Sixers have decided to make some modifications to their defense, with tweaks already being implemented in the early days of training camp.

Specifically, the Sixers are hoping to do better against 5-out offensive sets, based on the success Boston had running them in the Eastern Conference Semifinals.

Before we dive into the details what the Sixers are looking to change, let’s first address the basics of a 5-out offense.

The essence of the concept is pretty self-explanatory. The team with the ball brings all five of its players out to the perimeter, spreading them from corner-to-corner along the 3-point line.

The goal of this formation is to create a balanced look loaded with efficient marksmen, the threat of which will open up and space the floor.

When passed the ball, players can then decide how to best proceed – shoot, if a quality opportunity presents itself, or attack the rim via spacious driving lanes, if that’s the option appears more optimal.

Here’s an example of Boston utilizing a 5-out play against the Sixers in the playoffs. The resulting lay-up salted away Game 2 of the series.

Notice in this sequence that Boston’s action lured Joel Embiid to the top of the arc. That Embiid went to close out made sense, given that his man, Al Horford, is a dangerous 3-point shooter.

But instead of hoisting a three, Horford instead chose to go to the basket. He had the room to do so because the Sixers had no one – let alone one of the top rim-protectors in the league – left to defend the backline.

Herein lies one of the quandaries that an effective 5-out offense presents. Whether it’s against Boston’s All-Star Horford, or another versatile stretch five in the NBA, the Sixers are striving to shore up this aspect of their D.

“The end game is this. You learn where you finish, that is where you begin,” Brett Brown said Monday, following a practice session in Camden. “The 3-point shot is offensively driving everything. How do we keep Joel Embiid on the floor when you’re playing against 5-out?” The Sixers reasons for wanting to resolve this matter are as obvious as Embiid’s defensive gifts. In such a relatively short period of time, he’s proven to be that good, that impactful, and that important, especially around the basket.

A season ago, en route to All-Defensive Second Team honors, the forward-center ranked 10th in blocks (111), fourth in blocks per game (1.8), and seventh in block percentage (4.8).

Brown alluded to another telling statistic – that Embiid defended 52.4 percent of field goal attempts taken on him at the rim. The number, according to stats.nba.com, was among the best in the league.

“We’re trying to anticipate that [5-out] environment, and we’re practicing now on how to keep him closer to the rim,” said Brown, who called Embiid the “best rim-protector” in the NBA.

“How do you keep the game in front of you? How do you not get beat on the dribble, and how do as much was as we can to get Joel at the rim, and cover him around that. That, to me, is playoff defense. That’s where we’re at.”

When you’ve played a certain way for a while, then throw a couple fresh wrinkles into the equation, it’s only natural for a feeling out period to follow. Embiid, for his part, recognizes this, and knows patience is necessary.

“We got to learn to play with each other,” said Embiid. “That type of defensive concept, you’ve literally got to understand each other’s movement.”

This season, assistant Billy Lange will be in charge of the Sixers’ defense, taking the mantle from Lloyd Pierce, who was hired to coach the Atlanta Hawks. The 5-out factor was examined at length throughout the summer. 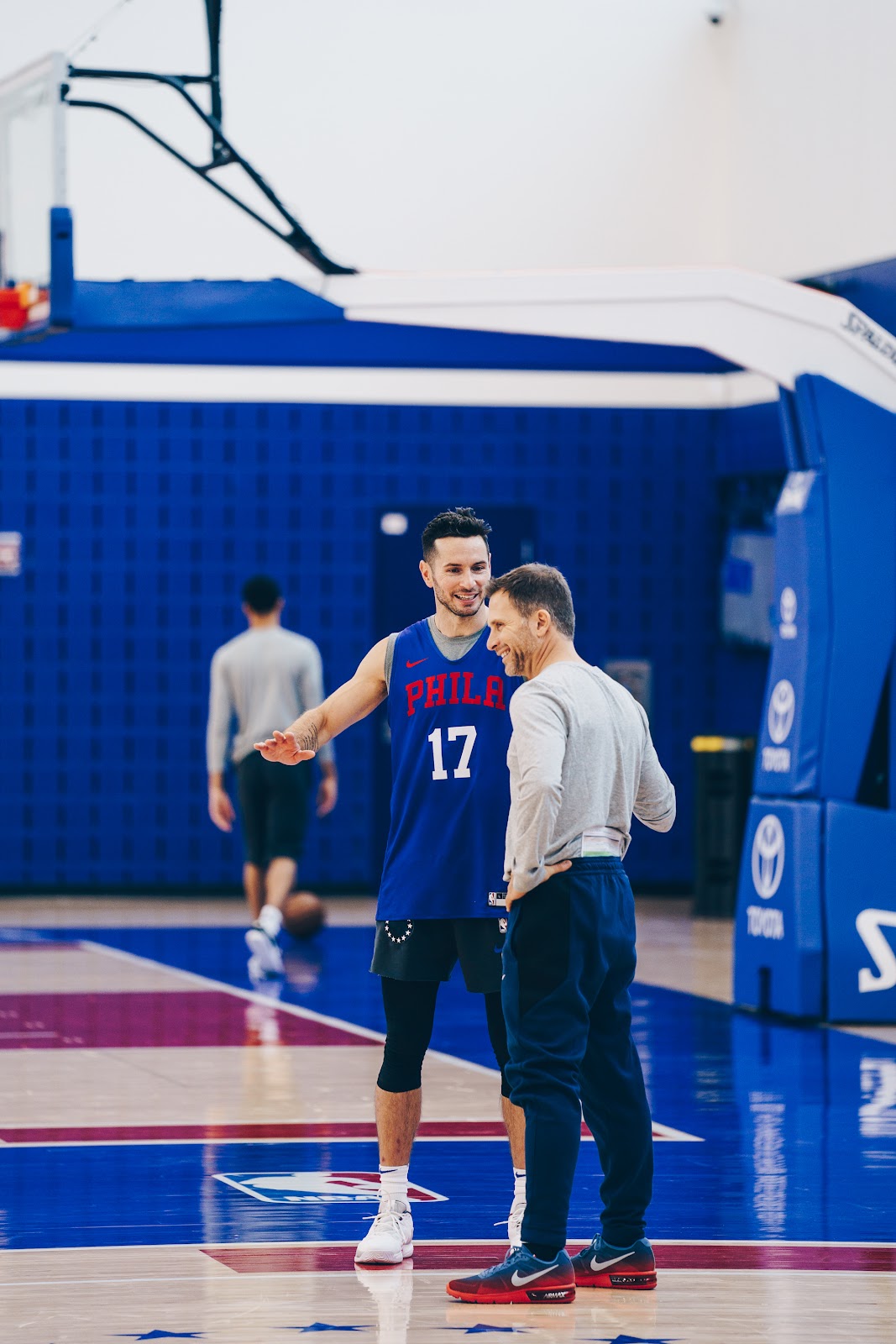 “We’re trying some things a little differently,” Brown said. “We could experience some pain initially, but I feel like to get where we want to go, we’re going to have to do that. We don’t want to coach afraid. We want to be bold with what we think, why we think it, and be committed to doing it. So, we’re starting now.”

“We can only get better,” Embiid said about the Sixers’ defense. “We were third, and there’s a lot of room for improvement. We got to be first this year.”

• Billy Lange and Lloyd Pierce were two of the original assistant coaches on Brett Brown’s staff, joining the Sixers prior to the start of the 2013-2014 campaign. After Pierce landed the Atlanta Hawks’ job this off-season, Lange flipped from coaching the Sixers’ offense to the overseeing the defense. In regards to the switch, Brown said, “[Lange] is prideful, he’s studied, he’s been a head coach before. Billy has been excellent at helping coordinate this type of effort.”

• T.J. McConnell also weighed in Monday about Billy Lange, sharing insights on Lange’s coaching style. McConnell said, “He’s obsessed with winning. He works tirelessly on how he can make our defense better, and we all respect that, and want to learn the new stuff he’s trying to put in.”

3 ways Ben Simmons can take the next step
Landry Shamet has perfect mentor in J.J. Redick