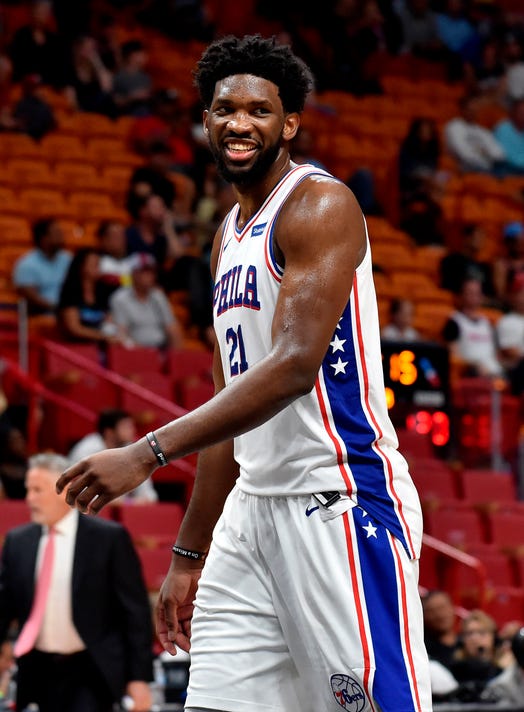 Joel Embiid has jokes for most situations. But here’s something about the Philadelphia 76ers center that’s no laughing matter: his candidacy for the NBA’s Most Valuable Player award.

The NBA chugs along fueled by trends and cycles, and Embiid, despite a mountain of stats and metronomic consistency throughout the first quarter of this campaign, might not be the most fashionable of choices.

LeBron James doesn’t just have the standing reputation as the best player in basketball, but also the narrative of a switch to Hollywood and the task of lifting an underwhelming cast of associates to spur his claim for the accolade.

Meanwhile, Giannis Antetokounmpo and his highlight reel heroics earned him Eastern Conference player of the month in October/November as he continues his transition from star to megastar. Also, Kawhi Leonard, Kevin Durant and Damian Lillard are deservedly in the MVP mix.

Yet Embiid has a solid argument to be the most worthy, as he propels the surging 76ers toward what the City of Brotherly Love hopes will be a serious run at a championship.

If we are to assume the most important bit of “MVP” is the “V”, then it is hard to find anyone more “valuable” than Embiid.

Through 25 games – of which Philadelphia won 17 – Embiid averaged 27 points and 13.4 rebounds, a combination not matched in the opening stint of a season since Moses Malone in 1981-82. His three-point shooting and ability to get to the free throw line also add weight and versatility, but that’s just part of it.

When a league becomes fixated on something as deeply as the NBA’s adoration for all things offense, it actually makes the opposite that much more valuable. Embiid is a force at the other end too, to a truly elite level, with two blocks per game and domination on the defensive glass.

The well-rounded nature of his game is all the more remarkable when you consider it was only seven years and four months ago that Embiid began to take basketball seriously, following a camp in Cameroon arranged by the LA Clippers’ Luc Mbah a Moute. Embiid skipped the first day of the tryout to play video games instead, and only went for day two on the orders of his disciplinarian father, a senior army officer.

The 76ers certainly think so. They have won four straight and that would be nine if not for a head-scratcher of a home defeat to the hapless Cleveland Cavaliers. The addition of Jimmy Butler also has added an injection of intensity and energy.

There have been none of the personality issues Butler had with Karl-Anthony Towns in Minnesota, Butler seemingly happy to accept this is Embiid’s team. And here is something worth consideration: how strong might the 76ers look once Embiid, Butler and Ben Simmons grow fully accustomed to playing with each other?

Wednesday night’s showdown with the Toronto Raptors will pit the two hottest teams in the Eastern Conference, while possibly providing a Conference finals preview.

“I feel like if I’m an MVP candidate or if I win the MVP, that means we are on another level,” Embiid told Yahoo Sports before the season. He is holding up his end of the bargain, and his colleagues are responding around him.

The 24-year-old is an old school big guy in the post, but also morphs into that most modern of NBA things – a very tall man capable of swishing threes – when the mood and necessity strikes him.

All this makes it easy to forget that last season was his first predominantly healthy campaign, a year in which he was named an All-Star and was a Defensive Player of the Year finalist, before a late season collision during a game cracked an orbital bone and cost him some playoff effectiveness.

This season, everything is coming together and barring an unexpected loss of form it is hard to figure out how to stem his progress. Embiid’s size, footwork and two-way flexibility makes him a puzzle that can’t be solved, only managed.

That in itself makes him an MVP contender. The league sometimes works in strange ways but it should be remembered that the MVP award isn’t a popularity contest or a longevity reward. It is supposed to do what it says on the tin, recognize the player who has been the most valuable to his team.

The list of legitimate candidates isn’t especially long, and right now, Embiid belongs at the top.