This week, still having our holiday spirits warmed by the recent Narberth Dickens Festival, we present part two of: A 76ers Christmas Carol …

A cold sweat broke out on his back when he remembered his encounter with the shade of Jerry Colangelo.

“Just a dream” he muttered out loud to no one in the room.

The bell chimed the time. Ten at night.

That made no sense to Silver as it had been well past ten when he went to bed. It wasn’t possible he had slept through an entire day. His mind was reeling when the bell sounded again.

Silver got out of bed and began to walk to the window with the intent to see the if he was mistaken about the sound outside.

The bell rang out again marking the time.

The chime still echoed in his ears when a light broke through the darkness behind him. It wasn’t a strong light, enough to change the room from darkest night, to merely dim.

It may have been his imagination but as Silver stood with the light shining behind him, afraid to look, he could have sworn here heard the faint voice of Colangelo say, “You will be visited three times…”

Slowly he turned and see the source of the light. Sitting atop a chest of draws was a small person. At least he thought it to be a person. It was a strange figure, but childlike in its dimensions and old in its visage, but slowly it seemed to morph back and forth as he watched. One moment it looked young, one moment it looked old. Sometimes it’s hair was in long black braids, and sometimes it was short and cropped. Its face was at times innocent and filled with wonder, but then without any movement that he could perceive, it was older and lined with wisdom. Somehow both versions had a wry, knowing smile that make it look like a trickster of sorts.

The one thing that didn’t change on the figure was the jersey that it wore. It was a black jersey, with red lining the shoulders. The logo said ‘Sixers’ in bold white letters with a star dotting the I. The star was glowing brightly on the beings chest. A basketball swooped under the words. Silver had never liked that particular jersey. He remembered how much it contrasted to the bright purple and gold of the Lakers uniforms in the finals they had played against the Sixers.

“What’s up?” said the diminutive figure. When it spoke the light the being gave off glowed slightly brighter and pulsated with each word.

“Are…are you the spirit that Jerry said would be coming?”

“I am, the first of three!” the small person responded with a joyful voice.

“Are you Allen Iverson?” Silver asked. He the spirit looked just like him and the voice sounded the same.

“Nah not really, a couple of years. Unless you want to travel back to 2001 and talk about who you were pulling for in the finals.”

The ghosts stood up and held out his hand to Silver, “Let’s go, I don’t have all day, and you’ve got some other appointments.”

Silver walked over to the ghost and took his hand. The hand felt solid and real to Silver but when they touched the rest of the world seemed to shift. Everything began to seem almost hazy.

“We’re going on a journey.”

The ghost winked and suddenly they were flying. They passed through the wall of Silver’s house and began to soar up into the sky. Silver’s eyes went wide and his felt his stomach drop. The city began to whip passed him as they flew higher and higher into the night. Eventually, they slowed and stopped high above New York City.

“This is amazing.” Silver cried out.

“Hold onto your butt.” the Ghost said with a laugh and then they took off like a shot south. They flew so fast that Silver couldn’t make out the land below. The accelerated faster and faster until the lights below and the stars above were just long single streaks of yellow and white light.

Silver wasn’t sure of it but he suspected the high keening sound he heard was his own voice screaming. 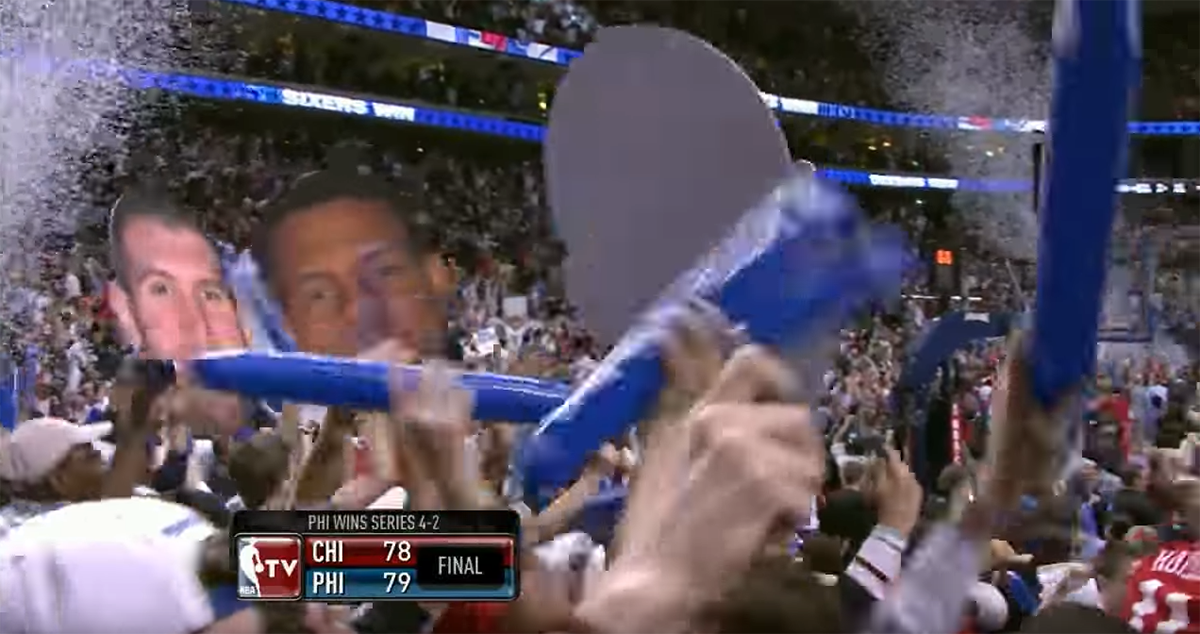 Suddenly there was a loud pop and bright lights exploded into his vision. It took a moment for his eyes to adjust. When they did he saw he was standing on the court at a basketball game, except no one was playing. He looked around and saw it was a Sixers game, but not the Sixers he was used to. He saw Jrue Holiday, Evan Turner, and even Elton Brand. They were standing near their bench and looking at a figure laying on the floor under one of the baskets. A crowd was gathered around the prone player. The fans in the stands were quiet, with just a murmur rising from the stands. He looked up and saw the scoreboard. It was the Bulls vs the Sixers. The Bulls were up 99-87.

“Can these people see us?” Silver asked frightened.

“We are but shades of a future yet to come, they can’t see us. Do you know where we are?” The Ghost asked.

“The Sixers-Bulls playoff game from 2012. The game where Derrick Rose got hurt. Why are you showing me this awful moment?”

“This is where it began for you wasn’t it?”

“Your anger at the Sixers.”

“I wasn’t angry at the Sixers. I was sad for Derrick. The Bulls should have won this series.”

“But they didn’t. The Sixers did.”

“The Bulls should have. They were a fun team! People enjoyed them! The Sixers…”

“They didn’t deserve to win.”

“The people in the stands would disagree.”

Silver glared at him. The ghost merely shrugged, “Come, there is more to see.”

The world began to shimmer before Silver’s eyes and got very bright. He closed his eyes tightly, and when he opened them he was in a radio booth.

“Where are we now spirit?”

“This is when Spike and Mike first meet to talk about the Sixers on the radio.”

“Who on earth are Spike and Mike?”

“They do the ‘Rights to Ricky Sanchez’ podcast.”

“Should I know them?”

“Probably not, but they’re the ones who popularized ‘Trust the Process’.”

Silver rolled his eyes but listened. He didn’t care for the jokes, but after a while, he was impressed with their passion if not their opinions.

“They love the team.” The ghost said with what sounded like pride.

“Most fans do. That’s why,” he paused and made a face, “the whole ‘Process’ thing had to be stopped. It was a betrayal of fans like these.”

“Was it though? Their team is in the playoffs and giving the Celtics a challenge, and yet they are describing the basic idea of ‘The Process’, and how much they would like to see it implemented.”

“I think the fans were excited by that team and the future it had!”

“Yeah, everyone is excited by a playoff team. But fans like these guys,” he gestured to Spike and Mike, “want a team that has a future. This team was aight, but they might not have made the playoffs if the season hadn’t been short.”

“The Sixers had a great veteran coach and a good front office. They would have been happy if the Bynum trade had worked out.” Silver responded indignantly.

“But it didn’t. And the team was nowhere. Doug Collins played my man Royal Ivey in crunch time minutes and started Damien Wilkins. Ain’t nobody wanting to sign in Philly to play that game.”

“Better that than losing on purpose!”

“Process wasn’t about losing on purpose. Was about getting stars the only way available to them.”

“What’s the difference? It was still not what we do in the NBA. Organizations are here to do their best and to win ball games. Not treat players like they’re just entries on a spreadsheet.”

“Oh? Yeah? Supposed to win games at all costs?”

Silver glared at the ghost and all but shouted, “YES.”

The ghost grinned and the world shimmered again before dissolving into a painfully bright light.

When the light was gone Silver rubbed his eyes saw himself standing at a podium. His past self was wearing a serious gray suit and sharp blue tie.

“Accordingly, effective immediately, I am banning Mr. Sterling for life from any association with the Clippers organization or the NBA.” his past self said forcefully.

Standing beside the stunned Silver the ghost clapped. “You were great today. One of your finest moments as commissioner.”

“This…what does this have to do with the Sixers?”

“Nothing. But you were great here. You saw a problem and took action.”

“I did what had to be done. Sterling was not someone who should be representing our league. He was a terrible owner and for the whole league to move forward he had to go.”

“I couldn’t agree more. Some things are bigger than the game.”

Silver watched himself speaking on the podium for a few moments, before finally saying, “We did the right thing that day.”

“Makes your hatred of the Sixers seems kinda small and petty doesn’t it? Like maybe they’re just trying to build something that lasts, and you’re trying to do the same with the NBA?”

“I…” Silver began before the world began to dissolve again, but this time it wasn’t into a bright light, but into darkness. His past self faded from view, leaving only an inky blackness.

Silver gasped and sat straight up in bed, panting and covered in sweat. It was dark, but he could tell he was home.

“It was just a dream then., he said out loud to no one in particular.

As soon as he said it he heard the church bell chime as he had before. In almost the same moment he heard his closet door creak open, filling the room with a warm light.

Jacob Jones-Goldstein has written about the Sixers for Roundballrev.com, loves statistics, and Trusts the Process. He dabbles in fiction, watches a lot of movies, and goes to more concerts than he should.